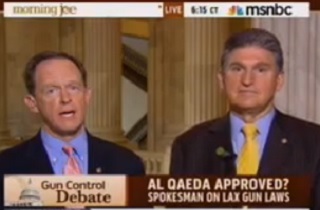 On Thursday morning’s Morning Joe, Sen. Joe Manchin (D-WV) and Sen. Pat Toomey (R-PA) promoted their compromise bill on background checks by asking the Morning Joe crew for help. “If y’all will do one thing for us,” Manchin said, “what you did this morning, showing the al Qaeda, how easy it is to get guns, and he said ‘Go do it,’ that will help us more than anything that we can do.”

Manchin is referring to a video in which al Qaeda spokesman Adam Gadahn urges American brothers in arms to exploit the gun show loophole to arm themselves for an attack.

Senators Manchin and Toomey were trying to allay the concerns of gun enthusiasts about their compromise bill. “The most important thing is if they will just read the bill,” Manchin said, “and both Pat and I are encouraging everybody. It will be on both of our websites.”

He added that “If y’all will do one thing for us. What you did this morning showing the al Qaeda, how easy it is to get guns, and he said ‘Go do it,’ that will help us more than anything that we can do, and also by showing the common sense approach.”

It took them a minute to find the tape, but eventually, they played a clip of al Qaeda spokesman Adam Gadahn informing his followers that “America is absolutely awash with easily obtainable firearms. You can go down to a gun show at the local convention center and come away with a fully automatic assault rifle, without a background check and, most likely, without having to show an identification card. So what are you waiting for?”

Sen. Manchin is a pro-gun legislator from West Virginia who famously shot a piece of legislation with a hunting rifle in a campaign ad, but who has become a crucial bridge-builder in the post-Newtown effort to reform gun laws. Time will tell how effective he has been, or how strong these first steps at reform will be, but Manchin is absolutely right that if people knew that al Qaeda has long been planning a Mumbai-style attack in the U.S., and that our gun laws would enable them to tool up for such an attack legally, there’s no way that anyone could oppose airtight background checks.

Except, as Joe Scarborough explained earlier in the show, that tape is nearly two years old. Readers of this website already know that, but when the tape came out, in June of 2011, it got very little attention. Rather than being alarmed, the right-wing media dismissed the tape by virtue of Gadahn’s reference to “fully-automatic” weapons, as if that distinction would make any difference in an attack on the Mall of America (Gadahn wasn’t that far off the mark. Semi-automatic assault weapons can perform like full-auto without any conversion, and can be converted using kits available at gun shows). Right-wingers were also alarmed that Mayor Mike Bloomberg‘s group tried to make people aware of the tape. But terrorists arming up at our gun shows? That’s all good.

Still, right-wing is as right-wing does, but what is the mainstream media’s excuse for failing to sound the alarm when this tape came out? What is Joe Manchin’s excuse? What is the White House’s excuse? In June and July of 2011, I followed up repeatedly with various press officials, and they wouldn’t touch it with a ten-foot pole. This was in that pre-Newtown timeframe when it didn’t matter what happened, not the shooting of a U.S. Congresswoman, not massacre after massacre, not terrorists flat-out telling us they were going to arm up using our laws, would get anyone to do anything about guns.

This is not about blaming the media and the public for being cowed by the shrill gun nuts, it is about warning them not to allow it again. Our news media have a duty to serve the public, and they failed before Newtown. The bills that are being considered now are just a first step to real reform, and the public can’t afford another dereliction like this.