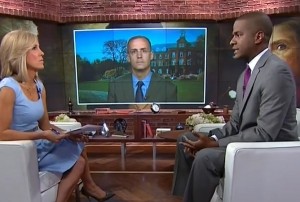 As fallout from the meeting between Attorney General Loretta Lynch and former President Bill Clinton begins to take practical form in Lynch’s promise to abide by the FBI’s recommendation in the Hillary Clinton email review, more and more Democrats are questioning the political wisdom of the meeting. On CNN’s New Day Friday morning, Former South Carolina State Rep. and current pro-Hillary CNN analyst Bakari Sellers probably echoed the feelings of many Clinton supporters who are wondering what the pair were thinking, telling host Alisyn Camerota that the meeting was “bad optics,” but also pointing out that it was not illegal:

Camerota: What was Bill Clinton doing?

Sellers: I think you have to take both of them for what they said. You had a conversation about golf and a conversation about grandkids. But even more importantly, let’s talk about Loretta Lynch and her character and her ethics. Loretta Lynch got confirmed in a Republican-led United States Senate. Her record as a prosecutor and attorney general cannot be impeached when it comes to ethics.

Sellers’ point, that Lynch’s reputation is above reproach, only makes the meeting that much more frustrating for Clinton supporters, because this unforced error will become fodder anew for people willing to believe that the Attorney General and a former president held a secret meeting to fix an investigation in the middle of an airport tarmac on live television.