Pro-Marijuana Candidate On MSNBC: Pot Could Be Vital For California Economy 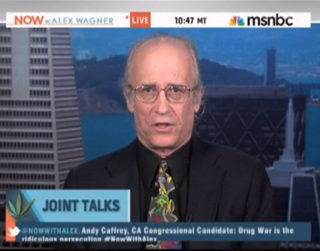 Candidate Andy Caffrey made a name for himself by promising he would smoking a marijuana cigarette on the steps of the Capitol building if he won his Congressional bid in his home district in Humboldt County, California. Caffrey visited Now with Alex Wagner to make the case for legalization, arguing that marijuana was not just a medical product in his eyes, but a potentially integral part of his district’s economy.

The Democratic candidate, who calls himself “monstrously green,” expressed some optimism about the potential for the drug to achieve a legal status given a number of right-wing public figures supporting the move, as Wagner narrated. Calling it a “ridiculous persecution,” Caffrety argued that “it would be a big travesty if the hippies died off without legalizing pot first” and explained that, in his district’s economy, where “we used to have a thriving timber industry,” marijuana could be a big help. Panelist Steve Kornacki chimed in to note that this made Caffrey unique, because the legalization he sought had as much to do with the economy as medicine, but that “in that neck of the woods, it’s becoming something that you have to have to win office.”

Ultimately, Caffrey saw the battle as one of culture. “People don’t know what it’s like to live in a culture of marijuana,” he asserted, thus perpetuating this “horrible persecution.” “Most people also think of it as something to be defensive about” when used, he added, explaining that he had seen the power of marijuana to control seizures and calm people and no one “should feel shy or defensive about taking their medicine.”