Pro-Trump Super PAC Strategist: ‘There Is an Otherness’ to Obama
video

Pro-Trump Super PAC Strategist: ‘There Is an Otherness’ to Obama 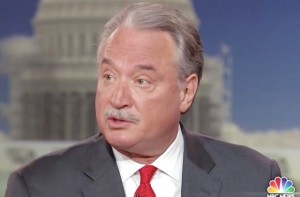 Alex Castellanos, a strategist for a pro-Donald Trump Super PAC, both went after Hillary Clinton‘s campaign for touching on President Obama‘s “otherness” before, well, agreeing with the premise of “otherness.”

Castellanos first attempted to blame birtherism on Hillary Clinton‘s people and dodged when Chuck Todd asked him about Trump playing that card for five straight years after Obama released his birth certificate.

Castellanos complained how unfair it is that Trump is getting treated unfairly on this issue, before going on to argue that actually, the question about Obama is less to do with his place of birth and more to do with this:

“Does he consider himself more of a globalist than an American? There is an otherness to this president, and people have tried to exploit that politically in different ways.”

otherness: not faith or race but his cool detachment, intellectual distance + oblig to global v. US responsibilities https://t.co/gjBgpp3YCy

wrote of it before: "Gifted with intellectual ability and cool detachment, Pres Obama…” https://t.co/irzhVPeifJ https://t.co/vIQMIdg53d

actually, aloofness refers to being distant, aloof or separate from people. unless you think everything is re: race? https://t.co/Yc43xJDIv1