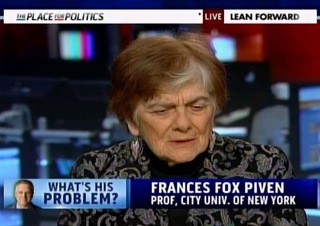 CUNY professor Frances Fox Piven is taking a break from academia to battle adversary Glenn Beck on his own turf: the media. The sociology scholar, whose work on armed revolution in the 1960s has made her Beck’s latest arch-nemesis, joined Cenk Uygur this evening and while she said she initially found Beck “funny,” recent death threats have left her scared.

Uygur introduces Piven by chastising Beck for his list of most dangerous people in the country, which, according to Uygur’s research, are all Jewish (Beck has not mentioned this on his program, so this was likely news to all two people who watch both Beck and Uygur religiously). With that in mind, he turned to one of these people, Piven, to discuss the “dangerous lunatic” who, according to recent reports from the New York Times, is now in physical danger because of Beck (Beck, of course, took no time to rebut the Times‘s “hatchet job“).

“I thought it was funny at the beginning,” Prof. Piven quipped, talking about the first time, about two years ago, when she became aware through her students that Beck was talking about her. Now, however, she finds Beck “insidious” and “very scary,” particularly because “people are listening” to him. She also noted how bizarre it was to her that Beck would describe “how big changes in American institutions can be traced to something these people did,” including herself. “In my case, it was a little article I wrote with my husband 45 years ago.”

Piven’s going public today may be the first of a series of appearances if Beck takes the bait and challenges her on her comments today.

Her segment with Uygur via MSNBC below: