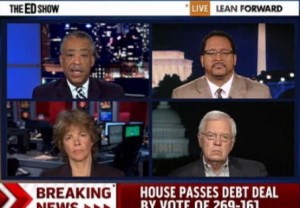 Al Sharpton continues to increase his presence on MSNBC, and last night, filling in as guest host for the The Ed Show, he moderated a discussion between three liberal commentators (Michael Eric Dyson, Bill Press and Laura Flanders) who took turns bashing the Tea Party and expressing disappointment with the debt deal. Sharpton kicked off the conversation wondering whether all future votes on raising the debt ceiling will be held hostage by the political opposition, like it was this time? The guests unanimously responded yes, as long as a Democrat is President.

Dyson provided some of the most fiery rhetoric, suggesting about the Republican party as a whole:

“Once having been successful at blindfolding the American public, putting a gun to the President’s head, forcing him to sign into law this extraordinary act of unpatriotic and irrational frenzy – I think they are now emboldened, they will now take this as a blueprint.”

And focusing more specifically on the Tea Party, Dyson later described them as a “narcissistic group of people who are incapable of acknowledging the greater good.”

Flanders expressed “moral outrage” over the fact that the Tea Party made everyone believe the false idea that government spending is what is holding back this economy, when in fact “intensive care” is needed by government to fix problems and to prevent the most vulnerable in America from continuing to be hurt. And batting cleanup in the “rain on Obama’s parade” lineup, Press suggested about President Obama’s compromise “this is a horrible deal, it’s a bad deal, it’s an amoral deal for the American people.”