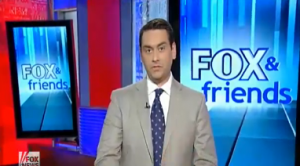 Everyone who’s been anxiously awaiting Anchorman 2, a sequel to the Will Ferrell hit comedy, need look no further. Earlier this morning, a Fox & Friends correspondent both introduced himself and signed off as Steve Doocy. Problem was, the guy talking was definitely not Steve Doocy. Oops. Was this a weird joke, or an incredibly hilarious mistake.

The correspondent was Clayton Morris who was introducing the “Fox Flash.” “Hey there everyone,” Morris says. “I’m Steve Doocy, this is your Fox Flash.” As embarrassing as that is, it’s made even worse by the fact that Morris does it again just a few minutes later. He signs off with a chipper, “That’s your morning Fox Flash, I’m Steve Doocy.” No! No, you’re not!

The video has been flying around the internet (because it’s hilarious) with many wondering how Morris could have messed up his own name. However, Morris is known for having a bit of an odd sense of humor, so it’s possible this was just a strange joke which some are now reporting it as. If it was, well, then it wasn’t a very good one. Morris can claim he did it on purpose until he’s blue in the face, but 95% of the internet is going to still know him as the guy who couldn’t remember his own name.

Regarding the alleged joke The Huffington Post reports “A Fox News insider says, ‘It was wishful thinking on Morris’ part, and executives didn’t find it amusing.'”

Of course, a teleprompter mistake and a weird inside joke aren’t the only possible explanations for the flub. It could be that Doocy has undergone some incredible plastic surgery. Or, even better, that “Steve Doocy” like “James Bond” is only a code name that is passed down from one Fox & Friends anchor to another.