Prosecution Battles Witness Over Firearm Training: Are You ‘Saying Zimmerman Is Law Enforcement?’ 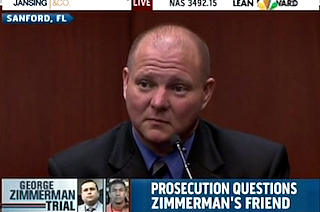 Defense witness Mark Osterman took the stand Monday morning and testified about the years of firearm training he had given his friend George Zimmerman. Upon cross examination, prosecuting attorney Bernie de la Rionda tried to distinguish between Osterman, a US air marshall and Seminole County sheriff’s deputy, and Zimmerman, a private citizen, to show that Zimmerman acted beyond his bounds when confronting Trayvon Martin with a weapon.

Throughout his questioning by the defense, Osterman spoke as if an expert witness on guns, though Rhionda was quick point that he was not one for the purposes of the trial.

Rionda then questioned Osterman on the details of training he gave Zimmerman, beginning with the type of holster—Zimmerman’s was an “internal holster,” not the visible variety worn by police officers, which Osterman admitted—and then on the training he had in dealing with confrontations as an officer.

“You’d only shoot if you felt the actual threat of a firearm,” Osterman said. “If there was a firearm pointed in your direction, you would fire again until it was neutralized…I’m a person that would give police commands and give that kind of commanding presence and if someone’s not obeying the commands right on the heels of a very stressful confrontation, I would probably keep the firearm out.”

Osterman added under questioning that unless presented with a direct threat he would try to restrain the other person, something Zimmerman would not know to do. “[Zimmerman] would not have needed to know how to arrest someone one, or how to restrain someone. It was basically: if someone is a threat to yourself or to someone in the general public, you keep a firearm out.”

“You’re not saying Mr. Zimmerman is a law enforcement officer, right?” Rionda pressed. “Unlike you, right? There’s a difference, right? A big difference, in terms of what police officers can do and what a citizen can do?”

“The authority is much different, correct,” Osterman said.

“If you’re confronting a person and they’re backing up, you don’t shoot them, right? Or do you? Does the police teach you to shoot them?”

Osterman also said he would keep a round in the chamber, to be ready to fire for purposes of self-defense.

Watch the testimony below, via MSNBC: