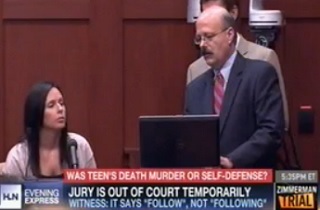 The George Zimmerman murder trial took a strange detour into social media this afternoon, as prosecution witness Jenna Lauer, who placed the 911 call on which screams for help can be heard, was accused by the prosecutor of following Zimmerman’s brother, Robert Zimmerman, Jr., on Twitter. Lauer made a credible claim of ignorance about Twitter, and denied following Zimmerman, which turned out not to be true. The real spectacle, though, was the utter failure of anyone in the court to know a single thing about Twitter.

Lauer’s Twitter account has since been suspended or deleted, but freelance journalist Matthew Keys captured a screenshot while it was still live, and it clearly shows Ms. Lauer followed 112 people, including Robert Zimmerman: 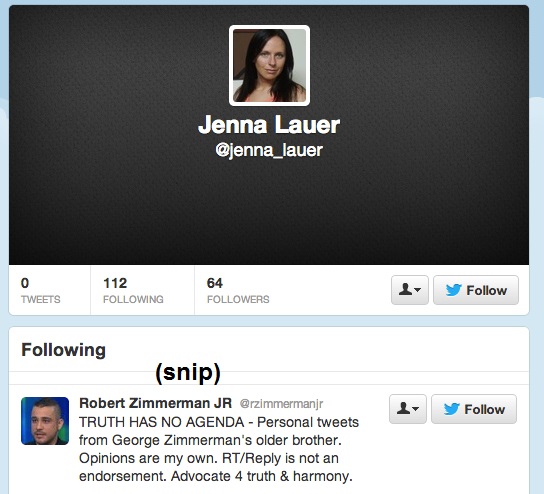 George Zimmerman’s brother has become a controversial figure in this case, particularly because of his Twitter activity. The revelation, however, soon gave way to the most massive Twitter fail in judicial history.

“I see it says that,” Jenna Lauer replied, “but if you — if you know anything about me and Twitter, I hardly know how to use that.”

“Do you know how they got on your Twitter?” de la Rionda asked.

Indicating the screen again, she said “It says ‘follow,’ it doesn’t say ‘following.'”

“What does that mean?” de la Rionda asked, to begin a painful clinic in Twitter cluelessness.

“It means that if I want to follow them, I could click that,” Lauer wrongly replied, and added, “I don’t acknowledge that I clicked to follow them. It’s asking me to do it now.”

Long story short, nobody in court knew a damn thing about Twitter, and they spent a few more minutes making Abe Simpson sound like Mark Zuckerberg, before forgetting the whole thing. This is not why Al Gore invented the internet, people.