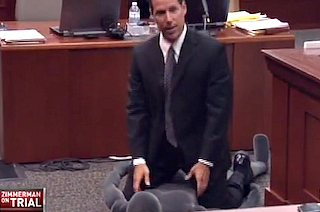 During cross-examination of defense witness Dennis Root, prosecuting attorney John Guy reenacted a potential scenario of the Trayvon Martin killing using a dummy, attempting to show that George Zimmerman’s story that he had fired while Martin was straddling him was not believable.

Root, who had approached the Zimmerman defense about testifying, was on the stand as an expert on self-defense issues. Guy immediately began to attack Root’s credentials, noting that Root could gain financially from appearing on national television to advertise his company, and that his investigation of the incident was less than thorough. (For instance, Root went to the scene of the crime in early June, during the day, despite the fact that the event had occurred in February after sundown.)

Guy put the dummy, representing Zimmerman, down on the floor and straddled it, and had Root locate where Zimmerman’s gun would be. Guy pointed out that in a position straddling the waist—which Root had testified Martin was in during the struggle—Zimmerman’s gun may have been accessible, but that according to Zimmerman’s account to his friend, Martin’s knees were more up to Zimmerman’s armpits, rendering the gun inaccessible.

In this case, Zimmerman would only have been able to reach his gun had Martin been backing up from him, i.e., disengaging from the struggle. This would be contrary to the forensic expert’s testimony yesterday that Zimmerman shot Martin while Martin was straddling him, i.e., still engaged in the fight.

RELATED: Expert On Physical Self-Defense Assesses Zimmerman’s Abilities: ‘He Doesn’t Seem To Have Any’

The forensic expert had also testified that the gun was at a 90-degree angle from Martin when it was fired. Root conceded to Guy that if Martin were backing up as Zimmerman was sitting up, the two would be at that angle even though Martin was retreating.

“Could it happen that way?” Root said. “The answer is absolutely yes. If he’s getting up, and he’s getting up together, sure, there’s no way I can sit here and say that, ‘No you couldn’t have two people that are maintaining alignment not have that entry.'”

As an aside, Guy asked if Root had had Zimmerman act out the incident: “Did you have the defendant do this?” 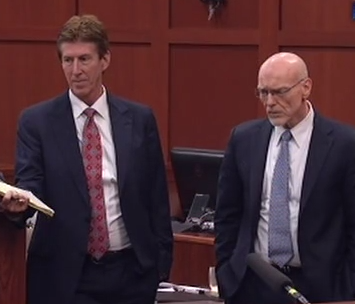