Protester Who Confronted Geraldo: Won’t Let ‘Outside Agitators’ at Fox Lie About Baltimore 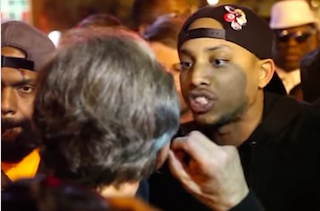 Baltimore resident Kwame Rose inadvertently became a viral sensation Tuesday night when he came between Geraldo Rivera and his Fox News cameras just as that city’s 10 p.m. curfew was going into effect. “You’re making a fool of yourself!” Rivera told the young man as he fired back, “We don’t your false coverage.”

A few days later, after Maryland State Attorney Marilyn Mosby brought charges against the six officers involved in Freddie Gray’s death and things had started to calm down in Baltimore, Media Matters spoke to Rose about his objections to “outside agitators” like Fox.

“I want people to know that this issue is bigger than some clip of me, it’s about Black Lives,” Rose said of his moment in the spotlight. “I have been out protesting for almost two weeks now without being on one camera. After Monday night when the media started pouring in, I sat at work and watched how the media basically forced people to believe that Baltimore was some Third World city. I just wanted to set the record straight and let it be known that this generation refuses to be misinterpreted.”

Rose lamented the fact that when media outlets “set up their camps in front of boarded up homes,” seemingly ignoring the organizers who were “cleaning up the streets as one community,” the “cameras weren’t rolling, nobody cared.”

“Outside agitators such as Fox News came onto the scene trying to exploit the situation,” Rose said of Rivera’s employer specifically. “I don’t care about the people watching Fox News, but I will not let you report lies about the people of this city.”

“Geraldo is like the majority of America,” he added. “He fears a black man so much that he [would] rather try to instigate a fight than to engage in a conversation. If you’ve seen the full clip of the video you’d know that his verbal assaults were a waste of breath.”

Fox only featured a short piece confrontation on air, as you can see below:

However, a more complete version, showing their extended interaction from a different angle, appeared on YouTube Wednesday where it has been viewed close to one million times since: