Pundits Say Not to Take Trump Seriously; Proceed to Dedicate Almost All Coverage to Him

Pundits Say Not to Take Trump Seriously; Proceed to Dedicate Almost All Coverage to Him 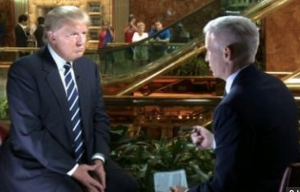 When Donald Trump’s candidacy for president was announced in June, rest assured the champagne corks were being popped simultaneously at MSNBC, CNN and Fox from executives to producers to hosts to pundits.

Not because anything resembling civil discourse and quality debate on the big issues of the day were now being elevated — quite the opposite. Instead, cable news finally its dream candidate, the kind of reality star who’s brutally candid, oftentimes irresponsible, unapologetic, easy to fact-check, and therefore utterly entertaining if you aren’t stupid enough to take what he’s saying too seriously.

But that’s where the rubber meets the road, doesn’t it? On one hand, we’re told from (pretty much) every analyst out there — liberal, conservative, doesn’t matter — to not take Trump seriously, and they’re right. But that’s only after cable news portrays itself as taking Trump completely seriously if the amount of air time dedicated to him across all platforms and programming is any indication. The downside for Republican candidates, of course, is all the oxygen being sucked out of the room by Trump.

It was hard enough for the million-to-one-shots like George Pataki or Bobby Jindal to get a few minutes on a national stage after their initial announcements. Now they’re completely off the radar to the point you wonder if they’ve dropped out yet. Even a Rand Paul has become relatively invisible. No candidate — even Hillary Clinton — is remotely in the same hemisphere when it comes to the amount of coverage Trump is getting against the other 18 some odd horses in the race right now. Even formerly ubiquitous figures (on the Sunday shows, anyway) like Lindsay Graham and Rick Santorum can’t buy any real attention right now, which was never really an issue for reasons good and bad before the billionaire entered the ring.

Add it all up, and we watch hosts and pundits parsing every word Trump says, their faces stone and sober in-between the 467th joke of the day about his hair…which aren’t predictable and old already or anything. And then in the next breath, they’ll mostly advise the public to simply ignore him as a food fighter, as a clown, as a 69-year-old attention-seeker. If anyone needs a good chiropractor…

Another common conversation around Trump (who will never be called “The Donald” in this space, like… ever) is the horribly negative effect he’s having on the rest of the GOP field, which will hit at least 17 before all is said and done (Scott Walker and eventual nominee John Kasich have yet to officially declare). But is his presence dooming the party’s chances 487 days from now? Please. Trump couldn’t be a bigger gift to Republicans right now… and here’s why: Simply by being Trump and creating all the crazy controversy he has in the process, he’s actually making most of the rest of the field appear more statesmanlike, more measured, more lucid about the issues at hand. And when a Kasich or Bush or Rubio emerges with the nomination or vice presidential bid, they can thank Trump for contrasting the actual GOP as more moderate and measured on issues like immigration and gay marriage than once thought. Know this: Nobody who has anything resembling objectivity looks at Trump as some kind of staunch Republican… they simply see him as staunch Trump, a planet unto himself.

In the meantime, Trump will be — as Dylan Byers wonderfully wrote in Politico on Wednesday — the ultimate clickbait. Producers and editors absolutely adore what a Trump campaign brings in the same manner sportswriters used to love Rex Ryan or Terrell Owens or Richard Sherman or Charles Barkley: He’s a soundbite-a-minute, powder-keg-meets-fireworks dream for producers not looking to deep-dive into (or have the time to commit to in a 24/7 A.D.D. news cycle) real issues that people actually care about, but instead look to fill the time during the slow summer months with easy empty calories. It rates well, so it’s hard to blame them.

MSNBC especially loves Trump because they haven’t had an outspoken high-profile Republican to beat up on like this since Dick Cheney during the Bush administration or Sarah Palin in 2008 or Mitt Romney in 2012. And lo and behold, ratings have relatively improved since Trump came on the scene for MSNBC at a time it desperately needs a lift.

CNN’s Wednesday interview with Trump (Anderson Cooper) will easily rate higher than Hillary Clinton’s interview did the night before despite all the hype (bank on it). Fox already has a strong relationship with Trump thanks to years of appearing on Fox & Friends during his former weekly segment. And when August 6 rolls around, and Trump, Cruz, Christie, Paul and Bush are on one stage for first GOP debate, FNC will register the highest numbers ever for a primary debate with millions of viewers to spare. Guaranteed. Twitter will finally break. And the first name on the aforementioned list will be a big reason why.

Overall, a rare win-win-win for major members of the cable news club.

Trump is the candidate we’re told not to take seriously. To simply ignore.

Until, of course, almost every minute and resource is dedicated… to him.