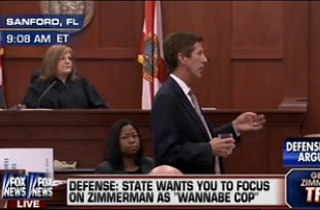 During closing arguments this morning, George Zimmerman‘s defense attorney made the case that the defendant isn’t guilty of “anything but protecting his own life” while acting in self-defense by shooting 17-year-old Trayvon Martin last year. According to the lawyer, the state’s case proves no guilt, but rather, emphasizes Zimmerman’s “pure, unadulterated innocence.”

Attorney Mark O’Mara made the case that the prosecution hadn’t proven Zimmerman’s innocence beyond a reasonable doubt. Instead, he suggested, the state’s case relies solely on a series of hypothetical “what ifs” and “could have beens.” He added that the prosecution has asked people to “connect the dots” when the “dots” themselves are located too far apart to make substantial connections.

O’Mara asked the jury to consider the question of whether, while on his way to Target the night of the shooting, “does [Zimmerman] jump out of his car and unholster his weapon and track [Martin] down, shoot him in cold blood? No. He does what he was told to do. He calls non-emergency. Not a big deal. Not an emergency.”

The lawyer added that Zimmerman’s tone on the emergency phone call was indicative of the defendant’s wariness of strange behavior in the neighborhood after a string of local robberies. Addressing why then Zimmerman muttered “fucking punks” while observing Martin’s behavior, O’Mara said: Maybe because he did match the description [of previous crimes in the area] unfortunately and that’s just maybe happenstance.”

Watch a portion of the closing arguments below, via Fox News: