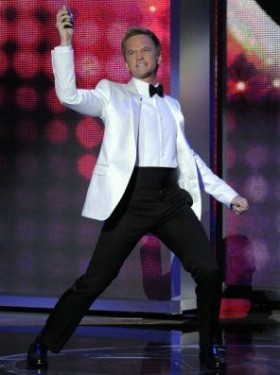 Because we love Neil Patrick Harris, and showtunes, and because we’re nerds, the first thing we looked for after the 61st Annual Emmy Awards finished was the clip of Harris kicking off the show with his fantastic opening number, “Put Down The Remote” — and the lyrics. We found the clip but strangely, no compulsive nerd seems to have slavishly transcribed all the lyrics — so, eh, we weren’t doing anything better, we did. They are too, too, too good to not blast around the Internet.

Written by Hairspray‘s Marc Shaiman and Scott Wittman, the team behind Hairspray who also wrote NPH’s closing number for the Tonys, it is not only a typically brilliant, clever and tuneful little number, it’s also pretty a pretty damn timely comment on the state of the industry right now, in September 2009. Here you go. Lyrics first; video below.

Don’t touch that dial
Yes it’s been quite a while
Since a dial was in style
But you know what I mean —
Don’t jump online
‘Cause this fine mug of mine
Needs a huge high-def screen!

Turn off that phone
‘Cause I want you alone
For the treasures I’ve got to share
Don’t hit that fridge – oh boy!
Let’s abridge
Your sweet derrière!
Don’t flip that switch
Aren’t you curious which
Stars got Emmys vote?
Don’t hit the loo
And whatever you do
Put down the remote!

The stars are all here
Tina Fey! What a year!
Sarah Palin did you no wrong
Thank God “boob tube”
Rhymes with “Tony Shalhoub”
Or he wouldn’t be in this song!
I see such legends galore
Like McLaine! Barrymore!
Every dame looks so luscious and cool
But like season on “Idol”
I’m not seeing Paula Abdul!

Straight from “Mad Men” there’s Joan
Ah, the curves she has shown
It would make a blind man say “damn,”
She could turn a gay straight –
Oh wait, never mind, there’s Jon Hamm!
And though it’s true
I’m a nominee, too
I’ll try not to gloat
But it’s a gas to be praised
And it’s certainly raised my quote!

Can’t you watch it later?

Yeah, you potatoes at home
Don’t let your fingertips roam
Tonight the Emmy is hitting the town –
So put down the remote!