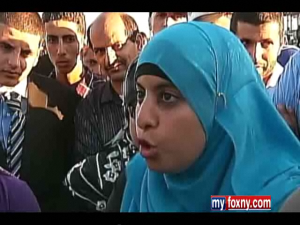 Rye Playland was shutdown and fifteen people were arrested for disorderly conduct yesterday after a fight broke out between police and a group park patrons who were upset that a group of Muslim women were barred from certain rides because of their headscarves.

The Muslim American Society of New York had organized a trip for about 3,000 to celebrate the end of Ramandan. The day turned when a group of women who were wearing Hijabs became upset when they were told by the Dragon Rollercoaster operator that they would have to remove their Hijabs before boarding.

Citing safety reasons, the park has banned “headgear” on certain rides. The rule was put in place three years ago, mostly to prevent hats from falling onto the tracks, and it is not Muslim specific. For one group of girls, however, this did not suffice.

“They said no because my of my ‘headgear,’ “ Ola Salem told the New York Times. “I said, ‘It’s not my headgear, it’s my religion.’” Another woman, Haifa Ali told Patch that she tried to explain to explain the importance of the scarf, particularly on a high holiday, to rides operator. Unsuccessful in their avails, and with more than a dozen of the park’s rides on the “no headgear” list, a handful of woman asked for refunds, saying that they felt they had been banned from the ride because of religious regions, not safety.

This is where things become less clear. According to the Parks Department, after receiving their refunds and exiting the park, several members of the Muslim American group began fighting amongst themselves. According to members of the Muslim American group and other witnesses, the fight began when either a park employee or a police officer grabbed on woman’s hijab and pulled her to the ground. MyFox New York has video of the scuffle, which we’ve embedded below. It’s difficult to tell how or with who the fight began, but clear that both sides engaged.

This all comes the same day that Pew Poll reports an increasingly satisfied Muslim American public, albeit one that continues to feel persecuted by anti-terrorism policies.