Quote Of The GOP Debate: Rep. Ron Paul Defends Heroin As ‘An Exercise Of Liberty’ 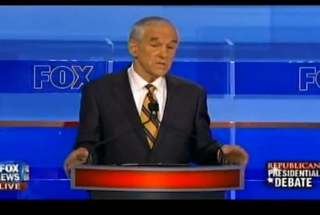 While it took a little while for the Republican candidates attending tonight’s debate to get going, the sheer diversity on the panel guaranteed some spirited answers, paramount among them Rep. Ron Paul‘s steadfast adherence to civil liberties, which somehow concluded with him supporting legalization of heroin to raucous applause– highlighting the thick tension between conservatives and libertarians on the GOP.

During a “lightning round” where candidates were asked to answer questions about the issues that would give them the most problems during the primaries, both libertarian candidates– Paul and former New Mexico governor Gary Johnson— were asked to defend their liberal stances on drugs. First was Rep. Paul, who Fox’s Chris Wallace confronted with his controversial position that drugs and prostitution should be legalized. His unapologetic response elicited cheers from the crowd, as he argues that, just as “you don’t have the First Amendment so you could talk about the weather,” civil liberties do not exist to protect personal rights upon which most agree. He later likened private freedoms like this to religious freedoms, prompting Wallace’s follow-up: “Are you suggesting that heroin and prostitution are an exercise of liberty?”

After tripping up a little, Rep. Paul replied “yes,” then found himself arguing in favor of legalizing heroin, asking, “if we legalize heroin tomorrow, is everyone is going use heroin? How many people here would use heroin if it were legal?” The question was greeted with cheers, to which Wallace replied with a smile, “I never thought heroin would get an applause in South Carolina.”

While Rep. Paul took the drug issue on from a philosophical perspective, libertarian bird-of-a-feather Johnson appealed to the empirical sensibilities of the audience. Describing the legalization issue as a “cost-benefit analysis,” Johnson threw out some facts on the “war on drugs”: “half of what we spend on law enforcement, the courts, and the prisons is drug-related… we’re arresting 1.8 million people a year in this country– we have the highest incarceration rate of any country in the world.” While this rhetoric didn’t have the “wow” factor of Rep. Paul’s hearty support of heroin, it highlighted the difference between primary and general election audiences to see how Paul’s simple arguments were met with cheers while Johnson’s, which take a bit more time to digest and dispatch any moral qualms with legalizing drugs, were met with silence.