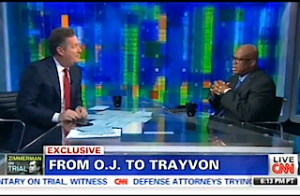 Tuesday night on CNN, Piers Morgan suggested that the George Zimmerman murder trial might seem “eerily familiar” to his guest, O.J. Simpson prosecutor Christopher Darden. Darden told Morgan that the Zimmerman trial, like O.J.’s, has been a “race case from the beginning.”

“It was made a race case prior to the case being filed,” Darden said. Referring to Rachel Jeantel‘s testimony, he added, “The defense played the race card the other day when they introduced a statement supposedly made by Trayvon when he referred to Zimmerman as a ‘cracker.’ And so, race is the case.”

Darden did not see much hope for the prosecution convicting Zimmerman, calling it “a case for the defense to lose” and predicting an “uphill battle” for the prosecution. He said that given the self-defense laws in Florida, he does not know if he would have even filed the case against Zimmerman, despite the apparent “political pressure” to do so.

When Morgan stressed that “we only have George Zimmerman’s word for it that he was actually acting in self-defense,” Darden countered that it does not allow the prosecution to “prove murder beyond a reasonable doubt.” He added that he has not seen evidence that would prove Zimmerman murdered Trayvon Martin, though he could see the jury delivering a “compromise verdict” of manslaughter.

Darden admitted that if the prosecution does lose, many will be quick to blame the the racial makeup of the jury, which contains no African-American jurors. Morgan pointed out that at least four out the six women who sit on the jury have family members who own guns and asked if that could be a factor as well. Darden answered, “Having a family member who owns a gun is a lot different from having a gun one’s self.”