Rachel Dolezal: ‘I Definitely Am Not White,’ But I Do Have White ‘Privilege’ 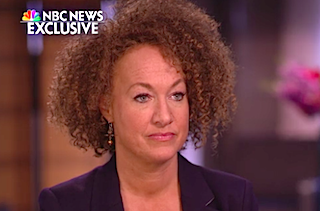 Rachel Dolezal may have resigned from the NAACP but she is not stepping down from her role as a self-identified black woman. In an interview with the Today show’s Matt Lauer this morning, Dolezal confirmed that she still believes herself to be black. She later denied to MSNBC’s Melissa Harris-Perry that she is a “con artist.” Now, in a clip from a follow-up with Savannah Guthrie set to air on NBC Nightly News, she is tripling down.

“It’s one thing to embrace the questions as an academic matter,” Guthrie told Dolezal. “It’s another thing to just actually be honest and transparent about who you are. And I think that’s where people are having trouble with you, Rachel. I think they feel that you have been, for whatever reason, and perhaps wonderful reasons, acting like you’re something that you are not.”

“Right. Well, I definitely am not white,” Dolezal said in response. “Nothing about being white describes who I am. So, you know, what’s the word for it? You know what I mean?”

“The closest thing that I can come to is if — if you’re black or white, I’m black,” she continued. “I’m more black than I am white. So on a level of values, lived experience, currently, I mean, in this moment, that’s — that’s the answer. That’s the accurate answer from my truth.”

However, in a subsequent online interview with NBCBLK’s Amber Payne, Dolezal did acknowledge that her light skin provides her with a “privilege” not shared with most black Americans. While most African-Americans can’t “choose to be white,” as CNN’s Don Lemon pointed out on Monday, Payne asked if she is willing to recognize the “white privilege” that allowed her to choose to be black.

“I am willing to acknowledge that there is privilege available to people with lighter skin,” Dolezal admitted. However, citing figures like Michael Jackson and Sammy Sosa, who both allegedly bleached their skin to appear more white, she argued that racial transformations can go both ways.

But, as Payne quickly noted, those examples are considered fairly “extreme.”

Watch video below, via NBCBLK: