Rachel Dolezal’s Adopted Brother: ‘I Never Viewed Her as Black’ 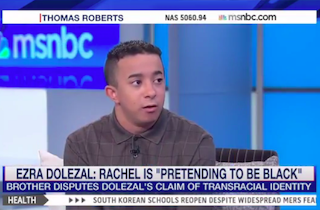 22-year-old Ezra Dolezal is one of four children adopted into the family of Lawrence and Ruthanne Dolezal. Unlike his sister, Rachel Dolezal, who has come under fire this week for identifying as black, Ezra actually is 25% African-American. Now, after comparing her actions to “blackface” in an interview with the Washington Post, he continued to speak out against what he sees as her deception on MSNBC.

While Dolezal has claimed she felt herself to be black when she was a young as five years old, Ezra said he only became aware of the change in 2011. As for the photos that she claimed to have drawn of herself using a “brown crayon,” Ezra said he doubted those exist.

In her interview with the Washington Post, Dolezal’s mother said that the family’s adoption of four children, two of whom are black, likely influenced her daughter’s transformation. “The adoption of the children definitely fueled her interest as a teenager in being involved with people of color,” Ruthanne Dolezal said. “We’ve always had friends of different ethnicities. It was a natural thing for her.”