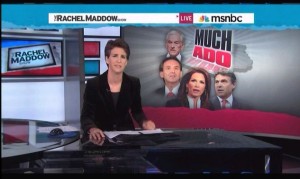 Following cable news this weekend, it is fair to have come out of the Ames Straw Poll experience believing that the media find it highly relevant and predictive to what will happen nationally in the 2012 presidential race. That feeling is not universal, however, as Rachel Maddow proved tonight by dedicating a segment to explaining how the Ames Straw Poll was a “racket” designed to make money that ultimately could have an impact in Democratic primaries, but not Republican ones.

Maddow began by lamenting the exit of former Minnesota governor Tim Pawlenty, and noting with some humor that Pawlenty’s campaign website was still alive and kicking, with no signs pointing to the candidate having dropped out. The incident, she argued, was “sad,” because “whether or not you thought Tim Pawlenty was going to win the presidency, Tim Pawlenty is out of the race for a reason that, statistically, makes no sense.” She compared the straw poll to a game of bingo: “maybe there is some chance, and even a little skill involved, but basically you need a first grader’s understanding of math in order to understand the predictive odds here.” Because candidates can buy ballots and hand them out, money is directly proportional to number of votes.

That, to Maddow, made it a racket, and “the people who are making money off this racket– the Iowa Republican Party– fully admit that it is a racket,” as it was thought of initially as a fundraiser. But whatever the origin of the event, the truth is, according to Nate Silver, the predictive power of the straw poll ends with the Democratic Party: “if you are a Republican,” Maddow asserted, “it really doesn’t matter,” because Iowa Republicans are more radical than the rest of the nation, as opposed to Democrats, who fall more within the average of national Democrats.