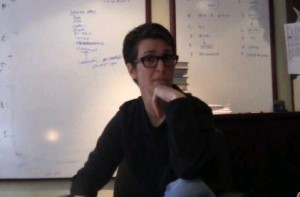 The hidden camera video of Mitt Romney‘s megabucks May fundraiser promises to dominate political news for the foreseeable future, as Democrats paint Romney as a disdainful rich guy who just told half of the country to drop dead, and Republicans…well, some mighty prominent ones are backing away from Romney on this, but conservatives have raised the specter of then-Sen. Barack Obama‘s 2008 remarks about “bitter”voters “cling(ing)” to guns and religion.”

On Tuesday, I asked some of MSNBC’s star commentators to weigh in on the comparison. Will this hurt Romney worse than the “bitter” comments hurt Obama?

Many liberals have rejected the comparison outright, given that the clear intent of the President’s (clearly condescending) remarks was to reach out to voters whose passion for guns and God keeps them from voting in their own economic interests, while Romney explicitly said he would not reach out to “those people.”

Fair enough, but no comparison is perfect, and that bit of contrast is helpful to the liberal argument, as far as it goes. Both men made condescending remarks, in front of wealthy donors (and believing they were private), that differed significantly from their respective public postures.

Unlike most pundits, liberal and conservative, I’m not so sure Romney’s remarks actually will hurt him with the voters he’s trying to woo. It makes superficial sense that such a display of contempt would hurt him, but Romney and the Republicans have been running a campaign of division all along, trying to amp up the white vote to make up for his deficits with every other group. Liberals are fixated on the broadness of Romney’s swipe, and the fact that it includes people like disabled veterans, senior citizens, and the rural working poor, but they’re missing the most important part of Romney’s remarks (emphasis mine):

There are 47 percent of the people who will vote for the president no matter what. All right, there are 47 percent who are with him, who are dependent upon government, who believe that they are victims, who believe the government has a responsibility to care for them, who believe that they are entitled to health care, to food, to housing, to you-name-it. That that’s an entitlement. And the government should give it to them. And they will vote for this president no matter what…These are people who pay no income tax.

Romney went on: “[M]y job is is not to worry about those people. I’ll never convince them they should take personal responsibility and care for their lives.”

There’s a decent chance that the electorally vulnerable independent constituencies that Romney should have offended with his remarks don’t see themselves as “those people,” even if they are those people, . It’s like the way people in The Matrix are all bald and pasty in the real world, but hot and Trinity-esque in the Matrix. That’s how they see themselves, and they’re just as likely to resent “those people” as Romney is.

While conducting a slew of interviews at 30 Rock today (more to come), I asked some of MSNBC’s crack talent to wiegh in on the story. While they all agreed that Romney would be hurt more by his comments due to their timing (Senator Obama’s remarks were made during the primaries, giving him longer to recover), they each had unique insights to offer.

For example, Rachel Maddow told me, elsewhere in our interview (coming soon) that she was more concerned with Romney’s foreign policy comments from a different section of that tape. As for the “Bitter” vs. “Those People” question, she thought Romney’s were substantively much worse, based on the contextual differences I discussed earlier, but also pointed out that even granting Romney’s premise, he was factually wrong about Obama’s 2008 supporters:

Now host Alex Wagner called it a “big, big problem,” and blasted Romney for his attempt at damage control:

The gang from The Cycle weighed in as well. Steve Kornacki pointed out that, in addition to then-Sen. Obama’s timing advantage, he had a greater “margin for error” than Romney does now (when Obama made his remarks, he was running against a Hillary Clinton campaign that was getting the kind of “campaign in disarray” press that Romney’s getting now). S.E. Cupp conceded the harm Romney’s remarks would do him, but said she views the two gaffes as equivalent. “(Obama’s gaffe) was worse than condescending,” she said, “it was offensive in a fundamental misunderstanding of how the other half lives.”

Krystal Ball and Touré pointed to the series of setbacks that Romney endured prior to this gaffe, including the Todd Akin kerfuffle and the poorly-received Republican National Convention. Touré also honed in on the “those people” part of the remarks, while Krystal made the point that “You cannot simultaneously believe that poor people and unemployed people are unemployed because of the devastating Obama economy, and that they’re unemployed because they’re lazy moochers.”