Rachel Maddow and Politifact Are Giving Me a Frakking Headache 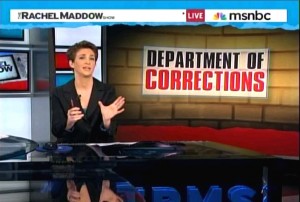 On Thursday night’s Rachel Maddow Show, eponymous anchor Rachel Maddow tore into Pulitzer-winner Politifact for the site’s takedown of her claims about Wisconsin’s budget. This immediately horrified me, as I have referenced Politifact’s take several times this week. Upon further review, though, I think I’m in the clear, and somehow, both Maddow and Politifact are wrong. Stay with me here.

This is going to get confusing, so I’m going to try to keep this as simple as possible. Politifact was correct in saying that Maddow claimed that Wisconsin was “on track to have a budget surplus this year.”

They were also correct to point out that this was not true, that later in the memo Maddow was quoting, a $137 million shortfall was projected.

Where they went wrong is in accusing Maddow of saying there was no shortfall. She never actually said that.

Here is where my head starts to hurt, because, as Rachel Maddow pointed out on her show, she not only said that Wisconsin was “on track to have a budget surplus this year,” she also said that in Wisconsin, “there is, in fact, a $137 million dollar budget shortfall.”

Now, I am prepared to stipulate that both Rachel Maddow and Politifact are smarter than me when it comes to this, but how the eff can both of those things be true? How can there be both a projected surplus, and a projected deficit? Correct me if I’m wrong here, but isn’t this like telling a woman at a bar that you have a Ferrari, then saying, on the way out of the club, “You’re gonna love my Tercel?”

Maddow’s executive producer Bill Wolff also dings Politifact for claiming that she also said that Gov. Scott Walker‘s cuts were responsible for that $137 million shortfall, and Wolff is correct here. However, a reasonable person could conclude that Politifact made a fair inference in thinking that she did: (from Maddowblog)

MADDOW: Even though the state had started the year on track to have a budget surplus—now, there is, in fact, a $137 million budget shortfall.  Republican Governor Scott Walker, coincidentally, has given away $140 million worth of business tax breaks since he came into office. Hey, wait.  That‘s about exactly the size of the shortfall.

That passage can be read both ways, but in at least the semantic sense, Politifact is wrong. Their reading of this passage is a matter of interpretation.

Of course, that interpretation is supported by the only thing that mitigates Maddow’s earlier contradiction, that there’s a surplus and a shortfall. The only way both things are possible is through the implication in her statement that Wisconsin “started the year on track to have a budget surplus,” followed by, “now, there is, in fact, a $137 million shortfall.”

The implication is that Wisconsin started with a projected surplus, which turned, over time, into a shortfall, but Maddow never actually says this. Now, according to the man who wrote the memo, both the projected surplus and the projected shortfall existed at the same time, the net result being the $137 million shortfall. If that’s what Maddow meant, then there was never really a surplus.

In any case, I’m in the clear, because when I was interviewed by SE Cupp on Monday, I only disputed the portion of Maddow’s segment where she said there was a surplus, and later in the week, I pointed out that she had yet to “address” Politifact, so I technically didn’t take a side, overall.

I am, however, taking a stand here. By the laws of the English language, and the economic grasp of someone who can figure out a meal tip with reasonable speed, I declare, for good and all, that Politifact and Rachel Maddow each got something wrong. But by my count, Politifact got two things wrong, to Maddow’s one, so Maddow wins. I also hereby award her six extra bonus points for handling sexist, homophobic insults with grace and humor.

Here is the segment from MSNBC: