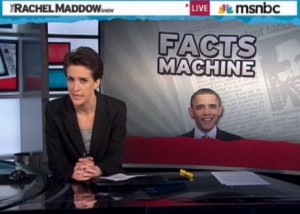 In a continuation of the right wing’s newfound fetish for the early nineties and microfiche, the conservative Hate-O(bama)-sphere has cooked up another half-baked “smoking gun” to destroy President Obama’s presidency. This time, it’s a quote from a 1990 interview that they say demonstrates that President Obama hates America. MSNBC mainstay Rachel Maddow tracked down similar (maybe even worser) quotes from Presidents George H.W. and George W. Bush that have yet to make the wingnuts spin.

The outrage began on a blog called Ironic Surrealism, who apparently don’t understand the function of quotation marks. Their headline reads “Obama 1990 Interview: ‘We’re Going To Reshape Mean Spirited Selfish America, I Hope To Be Part Of Transformation,’” which denotes that this is a direct quote from said interview. Here’s what then-President of the Harvard Law Review Barack Obama actually said:

“Hopefully, more and more people will begin to feel their story is somehow part of this larger story of how we’re going to reshape America in a way that is less mean-spirited and more generous,” Obama said.

“I mean, I really hope to be part of a transformation of this country.”

Whether you feel that headline was a fair paraphrase or not, the use of quotation marks makes it a lie (or maybe just ironically surreal?). As Rachel notes, other right-wing blogs inhaled the smoke from this gun, despite the fact that both Presidents Bush made similar remarks, one while he was in office!

In his famous “kinder, gentler” speech accepting the 1988 Republican nomination, the elder President George H.W. Bush called America racially unharmonious, and said we were sagging under the weight of bigotry. Or something like that. “I hope to stand for a new harmony, a greater tolerance. We’ve come far, but I think we need a new harmony among the races in our country. And we’re on a journey into a new century, and we’ve got to leave that tired old baggage of bigotry behind,” is what he said. Tomato, tomahto.

In a 2002 speech, then-President George W. Bush said that America is a stingy nation where injustice rules. Or something like that.

Kudos to Rachel Maddow for bringing these character assassinations on America to light, but that’s only part of the story. This kind of twisted “logic” is all the rage on the right these days. When they’re not outright lying about what he said, the right wing twists the words of the late Prof. Derrick Bell in much the same way, and to the same end: discrediting President Obama as an America-hating “community organizing” “radical,” a black militant in President’s clothing.

Aside from resurrecting a years-long effort to tie President Obama to black militant hate group The New Black Panthers, right-wingers have twisted Prof. Derrick Bell’s (who magically transferred his consciousness, Freaky Friday-style, into Barack Obama during a 1990 hug) position on school integration into an endorsement of segregation! I’m not kidding.

Here’s some of what Prof. Bell actually said, from the same source these geniuses cite:(emphasis mine)

“From the standpoint of education, we would have been better served had the court in Brown rejected the petitioners’ arguments to overrule Plessy v. Ferguson,” Bell said, referring to the 1896 Supreme Court ruling that enforced a “separate but equal” standard for blacks and whites. While acknowledging the deep injustices done to black children in segregated schools, Bell argued the court should have determined to enforce the generally ignored “equal” part of the “separate but equal” doctrine.

…Bell said his argument echoed that made in 1935 by civil rights pioneer W.E.B. Du Bois during a period when the NAACP was trying to end segregation by focusing its litigation efforts on the stark disparities between black and white schools. Du Bois, an NAACP founder who originally had attacked Jim Crow laws and the establishment of black schools, later came to the conclusion that “Negro children needed neither segregated schools nor mixed schools. What they need is education.”

In May 1954, as civil rights advocates celebrated the Brown decision, Du Bois, then 86 years old, noted that “no such decision would have been possible without the world pressure of communism,” which rendered it “simply impossible for the United States to continue to lead a ‘Free World’ with race segregation kept legal over a third of its territory.” Bell said that Du Bois predicted, accurately as it turned out, that the South would not comply with the decision for many years, “long enough to ruin the education of millions of black and white children.”

Prof. Bell is clearly not arguing in favor of segregation, but rather, indicting the results of Brown by saying that even segregation could have been better, relative to what we ended up with.

The right’s defective readings of what Barack Obama said would be easier to take if they also applied them to the Presidents Bush, and their Derrick Bell dysfunction would similarly look better if they would apply the same “logic” to someone like former Speaker of the House Newt Gingrich, who wrote an entire novel imagining that the Confederate States Of America won the Civil War. Now, what differentiates these two sets of people? Hmmm.

What amazes me is that, in all their early-90’s digging and clawing, this is the best they could come up with? Are you telling me that Barack Obama has never delivered opening remarks at an X-Clan/PRT double-bill, or been photographed wearing red, black, and green in the same outfit? I mean, c’on, even Jay-Z went through a phase. Seems to me all they’re doing is ruining President Obama’s street cred.

I’m reminded of a popular expression from that time; “It’s a black thing. You wouldn’t understand.”

Perhaps the 2012 corollary to that is “It’s a right-wing. We refuse to understand.”