Maddow Attacks ‘War On Caterpillars’ Remark: GOP Should ‘Own’ Their Record, Or ‘Stop Doing It’
video

Maddow Attacks ‘War On Caterpillars’ Remark: GOP Should ‘Own’ Their Record, Or ‘Stop Doing It’ 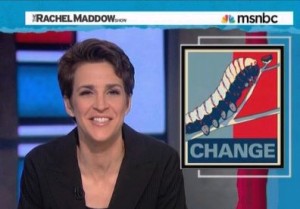 On her show Thursday night, Rachel Maddow took on Reince Priebus‘ remark comparing the notion of a “war on women” to a “war on caterpillars.” Democrats and the media aren’t just accusing Republicans without reason she said — but because they’re actually attacking women’s rights. Her advice? Own it and run on your record, or simply stop doing it.

There’s a reason why President Obama is leading among women, she said. And it’s not because of allegations from Democrats or misinformation from the media. The reason, Maddow said, is because the Republicans took control of the House, said they’d focus on jobs, and instead have attacked women’s rights and introduced numerous anti-abortion bills.

Maddow ran through a sampling of such legislation, including a measure introduced in Mississippi. This is what Republicans do under Priebus’ leadership, she said. “Reince Priebus, this is your life.” The GOP is “constantly and tirelessly and relentlessly waging war on women’s rights,” Maddow continued. “You don’t need the Democrats or the media to help give you a reputation for that. Dude, you have earned it. You guys are earning it every single day. Either own it, don’t be afraid to run on your record, or stop doing it. Those are your choices.”

Karen Finney joined Maddow to discuss the topic. Finney quipped, “I was a little surprised by caterpillars, because you know, they don’t believe in science either.” Trying to “demean and diminish” an important issue like women’s rights by talking about caterpillars is not the way to pivot away from a conversation that’s “hurting” Republicans, she said.

Offering some advice, she said, “For starters, they could stop talking about women like we’re idiots, where we couldn’t vote or take care of our own money, for heaven’s sake. I don’t think most women want to have this conversation about contraception because we all thought it was settled.”