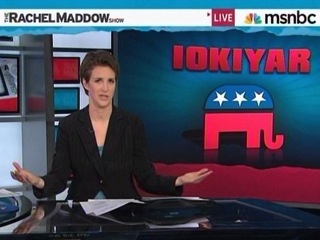 The resignation of Anthony Weiner has led to a debate over whether it was his initial actions or his subsequent lying that concluded his career, but tonight, Rachel Maddow proposed it was neither. Instead, listing an exhaustive registry of Republicans who she deemed had committed worse transgressions than him, Maddow concluded it was the story of “the media’s reaction to bad behavior,” and how a double-standard against Democrats made his behavior unacceptable.

“David Vitter is still there,” Maddow began, by now an oft-repeated mantra on the program, but Maddow didn’t limit herself to Vitter tonight. Instead, she also noted that Rep. Charlie Rangel‘s tax troubles made barely a dent in his career, former senator Larry Craig concluded his term even after being caught soliciting sex in public bathrooms, and House Speaker John Boehner had risen to his position despite getting caught “in a straight up corruption scandal handing out checks from tobacco companies on the floor of the House to members of Congress during a vote.”

Those that had resigned for similar transgressions previously, Maddow argued, had had their careers “ended by their constituents,” but the phenomenon that consumed Weiner today “had less to do with that than with the media’s reaction to the bad behavior,” arguing that both of his press conferences were “circuses” and that he resigned “not because of his bad behavior, but because of the media treatment of his bad behavior.” Maddow added the disclaimer that his behavior was “gross,” but nonetheless the “partisan double standard about immoral behavior” was the decisive factor.

In making the point that it was the media’s treatment of Weiner that ended his career, Maddow appears to be consciously ignoring the way Weiner treated the media– including Rachel Maddow. Yes, Weiner received very sharp criticism from the media during the past three weeks, but for the most part the most poisonous darts were thrown once he admitted to lying. Weiner lied in the faces of every major news network over the course of three days, called a TV producer a “jackass” for asking a question, and called the police on one reporter who wanted to speak to him. It took a bizarre comment suggesting he could not recognize his own genitalia for the press to finally begin contemplating the idea that he had actually sent the lewd photo out to Twitter.

In the meantime, the media bullseye was firmly on the back of Andrew Breitbart for breaking the story, and when not attacking the messenger, Rep. Weiner was given all the benefit of the doubt that the prestige of his office merited him. To suggest that the media’s treatment of Weiner was the writing on the wall is to imply that the press’s relentless scorn for him was preemptive and that Weiner had been forthcoming and frank with them throughout the ordeal. Instead, the media received combative, derisive self-righteousness for simply doing their job, and the few media outlets that took him at his word, like Maddow did, instead got exclusive access to Weiner’s blatant lies as recompense.

Maddow has more than enough room to defend the bizarre pastime of sending naked photos of oneself on the internet– and she is correct to point out that, as of now, there is no evidence that suggests Weiner broke the law. But blaming the media and some sort of “double-standard” for the way he was treated at his press conference today is to call for the press to permit gratuitous breaches of their trust from public officials merely in deference to their office– the very opposite of the ethos of the American media as it has existed since its formation.