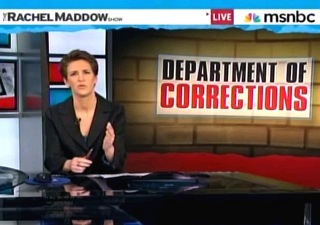 Rachel Maddow‘s corrections segment, “Debunction Junction,” just corrected a correction. Maddow was accused of spreading false information by watchdog site Politifact recently when she claimed “Wisconsin is just fine” and on the road to a surplus, and the site attacked her for omitting information about the state’s budget shortfalls. Tonight, she took down the claim with video evidence and then some, saving some time to defend Shepard Smith and address personal attacks on her for being gay.

“Maddow lied!” she shouted, mocking those at Politifact claiming she had never addressed the budget shortfall in Wisconsin, immediately before playing a clip of herself saying “there is a budget shortfall in Wisconsin.” It wasn’t the only time she had addressed it and she had the video to prove it, later mocking Politifact for being “wrong on the facts, and bluntly.” “Putting the word ‘fact’ in your name does not grant you automatic mastery of the facts,” she joked. She also noted that her program had reached out to Politifact (that correspondence here), but they notified the program they were not going to run a correction, which, to Maddow, completely negated the point of the organization.

She also addressed some other internet controversies– namely, the fact that Shepard Smith had used the same data on campaign funding, from the nonpartisan OpenSecrets.org, in his broadcast this week that she did. The seemed to have caused some controversy on the internet, in places Maddow describes as attacking her with claims like “Rachel Maddow is wrong and she looks like a man!” In one of the boldest addresses to personal attacks on her for being gay that she has ever made on the program, she tackled the criticism head-on as baseless, and continued to press the matter of being factually correct. “Just because you don’t like the way it sounds when I say it,” she told detractors, “or just because you don’t like my haircut, or just because you don’t like that I’m gay doesn’t make it not true.” In the interest of being factually correct, she even ceded some ground: “it is true,” she joked, “if you squint sometimes, I look like a dude, and I am definitely gay.”

Maddow concludes by pointing out that, while “calling bullpucky is fun,” the nature of journalism demands some facts before one can start calling bullpucky, whether or not the word “fact” appears in your name.