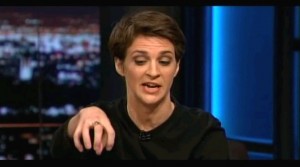 Rachel Maddow was busy during her appearance on Real Time with Bill Maher. First she commented on Keith Olbermann‘s exit from MSNBC, then she debated Reaganomics and finally opined about defense spending. When President Reagan’s Budget Director, David Stockman revealed the fact that more for defense is being spent today than in 1980 when the evil Russian empire was a real threat, the conversation launched into weighing the relevance and effectiveness of attempts to create the SDI missile defense program.

When the Wall Street Journal’s Steve Moore bemoaned the fact that we don’t currently have missile defense, Maddow attacked the idea:

“That’s the whole idea of SDI. We’ll protect ourselves by shooting missiles with other missiles. It’s never worked in a test, we’ve spent billions on it. And anybody who knows the physics of it, knows it can never work.”

Moore disputed Maddow’s conclusion that it’s never worked in tests, and Maddow concluded it’s a “hysterical fantasy” to think it would work.

However, more interesting than the back-and-forth between these two, was Stockman’s intriguing question: against whom exactly would we need a missile defense system? Assuming his suggestion is based on an assumption that America’s nontraditional enemies will use other, more modern means to attack and not on a belief that America no longer has any enemies, then Stockman’s point is an important one. As he suggested, China may be increasing in power, but they know better than to want to blow up America when our Walmarts continue to sell so many of their products.