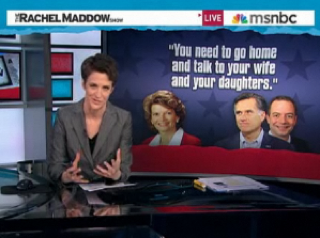 Earlier this week, Republican National Committee chair Reince Priebus tried to compare the “War on Women” narrative to caterpillars, confusing many. To Rachel Maddow, it was yet another sign that the men of the Republican Party really seem to lack an understanding of the objections to the way they discuss women’s health, but this she didn’t see as a blight on the whole party, but an error in branding: why have Priebus out on the fore of this issue when Sen. Lisa Murkowski has such a proven ability to connect with the women of her party?

“It’s an analogy in which women are caterpillars!” Maddow tried to explain, finding that this may not have been the best thing for Priebus to say. Besides complaining that the “war on women” simply didn’t exist, Priebus and several Republicans, notes Maddow, also began to decry the use of the phrase “War on ____” as “unpatriotic,” which she found “a little rich,” given all the “war on”s that Republicans claimed Democrats were responsible for. It was clear to Maddow that they needed a new voice, and confusing why they hadn’t chosen Sen. Murkowski.

Murkowski had spoken out on her own, impressing Maddow, arguing that “it makes no sense to go down this road” and revisit contraception. “It makes no sense to attack women and if you don’t view this as an attack on women, you need to go home and talk to your wives, talk to your daughters,” she told the host and advised fellow Republicans. Maddow saw this as Murkowski seeing that Republicans were “not being accused randomly and for no reason of going after women’s rights, they are earning that reputation by actually going after women’s rights,” something Priebus and company seem to miss– and that company includes Mitt Romney, whose position is “he says he supports a constitutional amendment to define life as starting at conception,” but then wants to be known for “supporting contraception.” “Those two things can’t overlap!” exclaimed Maddow.