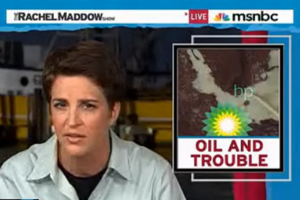 The BP oil disaster in the Gulf of Mexico that is starting to wash ashore is only getting sadder by the minute. Some of the most depressing images were broadcast tonight on MSNBC, as Rachel Maddow continues reporting from the affected areas, mostly beaches and marshes that are being engulfed in crude oil. The saddest part, according to Maddow, is that solutions to cleaning up the problem are about as plausible as the plots of MacGyver episodes.

Maddow’s sense of urgency tonight as she reported live from the Gulf coast was clear, and her anger at BP for their negligence equally strong. The main problem, she argued, was not that oil companies have accidents of this magnitude, but that they have spent no time researching solutions in case the worst does happen. Citing figures showing that energy companies were the top five most profitable corporations in America, Maddow suggested that it would have been wise for the oil companies to invest money in clean up technology, “but they didn’t. They can say they did if they want to, but who cares what they say at this point? It’s clear they didn’t.”

Then she explained the consequences of not having advanced clean up technology, mainly that it’s nearly impossible to do anything about the oil. She also made one of the most eloquent analogies on TV so far to explain just how few resources the clean up crews have to work with– it’s like an episode of MacGyver:

“Looking at the technology that we’ve got to deal with the oil that’s already leaked, it’s like… I felt like I was watching real humans trying to act out the plot from a MacGyver episode in real life. You know how MacGyver would make like a nuclear bomb with a matchstick and a piece of his own hair and some silly putty? Workers here are trying to achieve something that difficult with means that humble. And the problem is that none of us really is MacGyver, and none of it works.”