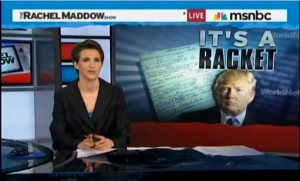 Rachel Maddow walked something of a fine line on her show tonight, balancing covering birtherism (“Reporting on spending press time covering ‘birtherism’ itself, I think is a defensible thing.”) and lending even more coverage and attention to Donald Trump and the headline (and ratings?)-grabbing birther movement. Maddow set out to figure out why (non-Fox News) journalists would devote time to covering the whereabouts of Barack Obama‘s birth certificate, pointing out CNN reporter Ed Henry‘s recent question regarding why the White House had not, at the time, released the President’s long-form birth certificate:

Legislation undermining the President’s legitimacy as an American, questioning whether he should have even been allowed to run for the presidency in the first place, That legislation that has been drafted by Republicans at the State level and at the Federal level. Republicans pushed it at the Federal level in 2009, and they are now pushing it in more than a dozen state legislatures.

Cashing in on a feeling that has to go unspoken, on a sentiment that rejects the idea that somebody who looks like President Obama can be an American president. That’s why Republican politicians have been pushing this as an issue.

Why is it being pushed by journalists?