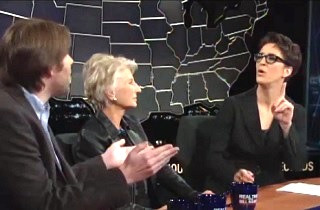 Rachel Maddow needs to get out more, as evidenced by her performance on HBO’s Real Time with Bill Maher this weekend. While the host of The Rachel Maddow Show churns out astute political essays five nights a week on MSNBC, her talent for casually destroying the fallacious thinking of others, to their faces, is woefully underused in that role. Case in point: Maddow’s effortless destruction of Bill Maher and The National Review‘s Charles Cooke.

It is a relatively simple matter to sound smart when you’re talking to yourself, in front of an audience that generally agrees with you, and this is a large part of what Maher, Maddow, and Cooke do on a regular basis. What separates the wheat from the chaff is how those skillfully spun thoughts hold up in an actual conversation, and on Friday night’s Real Time rock-paper-scissors matchup, Maddow brought Hattori Hanzo steel.

First, Cooke and Maher actually began on decently solid ground by criticizing MSNBC’s coverage of Governor Chris Christie‘s (R-NJ) scandals. While Maddow has been eating everyone’s lunch on this story for months, and hosts like Steve Kornacki and Chris Hayes have developed reporting and interviews that have moved the story forward, a lot of the rest of the coverage has been a repetitive waste of time. Maher and fellow panelist Jane Harman even managed to throw in a devastating knock at MSNBC’s “Breaking News” cutaway to Justin Bieber‘s arraignment.

However, when Maher and Cooke tried to make a dollar out of their fifteen-cent insights, Maddow cut them down with a flick of the wrist. Maher’s catchy phrase, “It’s not Watergate,” ignored the fact that Watergate wasn’t Watergate, either, until it was. Maddow patiently explained the developments in the story that she was the only one covering at the time, and which continue to this day, and that “When you have gonzo political corruption stories, you cover them.”

Cooke then waded in with one of those suggestions that sound good in your head, smirkily asking Maddow to “come clean. What you’ve been doing over the last two months is trying to get rid of Chris Christie from the race.”

“Why would I be excited to clear Chris Christie from whatever race you mean,” Maddow asked, and added “So you think that I’ve created the bridge story out of whole cloth in order to elect a Democrat in 2016? Muah-ha-ha!”

Cooke admitted that “there was a lot of cloth there,” but called the coverage “ridiculous,” which Maddow accepted as a compliment, and countered by laying out the undeniably newsworthy developments that continue to occur in the story. If MSNBC’s coverage has been excessive at times, they were also the only ones to report all of those developments.

Later in the show, Cooke tried to make a point about excessive government regulation by rehashing his January blog post recommending the extinction of an entire species in favor of agri-business. It sounds absurd when you say it out loud, but when you’ve only got The National Review editors and readers to get past, it can sound pretty good to let a three-inch fish die out so that farms can thrive once again. Maddow quickly, calmly pointed out the absurdity of blaming the California drought on a fish, as opposed to, say, climate change, and the equal or greater absurdity of deliberately knocking over an extinction domino in an ecosystem that supports many more useful species than the humble smelt.

Most of the time, people like Charles Cooke and Bill Maher trade in their respective brands of fraudulent sophistry unimpeded by the sharp-witted likes of Rachel Maddow, but Maddow also toils too often without the benefit of being able to test her blade. Republicans have learned, for the most part, not to come on her show, but when she all-too-infrequently ventures out, the carnage is beautiful to watch. And this is Maddow being nice.