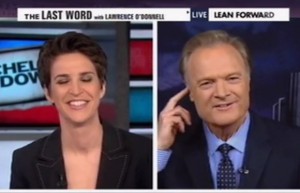 Earlier today, I provided a blow-by-blow of the latest chapter in Politifact’s ongoing feud with MSNBC’s Rachel Maddow, including a rather detailed analysis of the fact-checking site’s dubious ruling on Lawrence O’Donnell‘s claim that critics of the GI Bill called it welfare. As it turns out, I needn’t have bothered. On Monday night’s The Rachel Maddow Show, host Rachel Maddow dispatched with Politifact’s absurd ruling in about 20 seconds.

“Politifact looked at that record,” Maddow said, “and they found that the chairman of the veterans affairs committee in the House at the time criticized the GI bill by saying, “The bane of the British Empire has been the dole system.'”

“What’s the dole system, what’s the dole?” she continued. “The dole is welfare. That’s what British people call welfare. It’s an English language, slang term everywhere for welfare. So case closed, right? Lawrence’s ad says that critics of the GI bill called it welfare. Politifact finds that they did call it welfare. Politifact fact checks historical claim A, finds it to be true, and therefore rates the claim… Mostly False! They found it to be true, but they rate it Mostly False. They print the evidence that it’s true, ‘the bane of the British Empire has been the dole system,’ and right under that they say, ‘we found no evidence of critics referring to the gi bill as welfare.'”

She’s actually being kind. The fact that “welfare” and “the dole” are synonymous was explained to Politifact…by MSNBC! Here’s the portion of Politifact’s ruling that Rachel is referring to:

By email, MSNBC spokeswoman Lauren Skowronski sent us two batches of excerpts, some attributed to members of Congress as quoted in the 1944 Congressional Record. Many of the excerpts covered objections noted in the American Legion magazine article.

A memo from Melissa Ryerson, a producer of O’Donnell’s program, says some lawmakers and critics also fretted over the GI Bill’s “broad” education provisions. The memo also suggests that objections mentioning “relief” or “the dole” were equivalent to modern-day references to welfare. “If Mr. O’Donnell had used the word ‘relief’ instead of ‘welfare’” in the advertisement, the memo says, “no one would have understood what he meant.”

Politifact never bothers to refute this in any way (something I didn’t notice on first read; I assumed they were relying on a “to the letter” argument that they never actually made), yet still conclude that O’Donnell’s claim is “Mostly False.”

Maddow went on to do a few minutes of end zone celebrating, concluding that Politifact “for all intents and purposes, is dead. They are over. They are over and out.”

During the toss to The Last Word, host Lawrence O’Donnell thanked Maddow, and revealed that she had stepped all over his planned “Rewrite” segment on the subject, “which I can’t possibly do, because you did it so masterfully.”

It will be interesting to see what, if any, response Politifact has to Maddow’s obliteration of their ruling, and their reason for existing. Probably something like “We don’t expect all of our readers to agree with us on what words in English mean…”

Update: As it turns out, maybe my earlier effort wasn’t for nothing. In his “Rewrite” segment, Lawrence O’Donnell referenced the notation in our piece that Politifact’s own analysis “not only supports the spirit of O’Donnell’s claim, it renders it an understatement.”