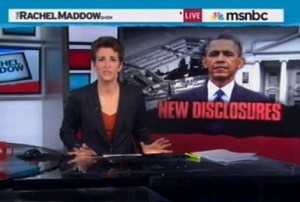 Rachel Maddow was slightly puzzled tonight about Attorney General Eric Holder‘s admission today that the U.S. government killed four American citizens via drone strikes. She found it amazing that anyone in government would admit this in the first place, but more importantly, she wondered why this particular piece of information was revealed today, why the government did not admit it before today, and whether said admission of such means that the nation might see a change in national security policy as a result.

Maddow first pointed out how one of the Americans Holder admitted to have been killed via drone strike was wanted by the FBI and his wanted poster was on the FBI’s website for hours after Holder made his public admission. To Maddow, this meant that either the entire government was keeping the FBI in the dark, or that the FBI was playing along in some kind of ruse.

She said the government has normally been “so acrobatically cagey” about public comments on killing people in counterterrorism efforts, highlighting how President Obama was careful to use the passive voice in announcing the death two years ago of Anwar al-Awlaki. Maddow wanted to know why the government admitted to these things today of all days, and why it was the attorney general of all people to do it.

But Maddow found something a little more galling in the public admission.

Maddow noted that Obama is expected to give a big speech on national security and civil liberties tomorrow, and wondered if the admission today means things are finally changing. Or, at least, the justifications for such things are changing.