Rachel Maddow: Did Palin Leave The Door Open To Run As A Third Party Candidate In 2012? 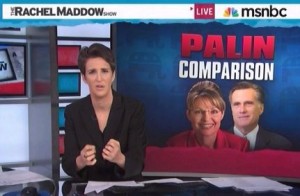 On her show Wednesday evening, MSNBC’s Rachel Maddow shared with viewers an email she had received from a “Lloyd Marcus” at “The Campaign to Defeat Barack Obama” — a group aimed at keeping Mitt Romney from winning the GOP presidential nomination.

“This appears to mostly just be a money-making thing,” Maddow explained. “If you attended a Tea Party protest in the last couple of years and had the misfortune of enthusiasm your name and your email address on something at that event, you have probably been getting spammed ever since by groups like this, trying to monetize Tea Party enthusiasm to turn it into fundraising.”

Maddow then pointed to Palin’s announcement today that she will not be seeking the GOP nomination, wondering where the Tea Party animosity was being channeled right now. It’s the Republican and beltway media line, Maddow continued, that emphasizes how “beholden” GOP politicians are to the Tea Party movement.

She explained that the same people behind the “Stop Romney” campaign are behind the Tea Party Express, a particularly powerful arm of the movement that recently co-hosted a GOP debate with CNN.

Maddow then floated an idea: Did Palin’s statements today leave a door open for her to run as a third party, “Tea Party” candidate? Hmmm?

Watch the segment, from MSNBC: