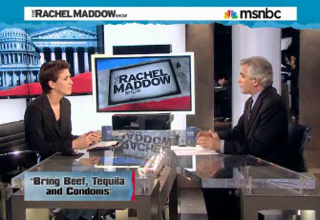 While the thousands of pages of email correspondence released this week from the years Sarah Palin was governor of Alaska have yet to provide any smoking guns, they certainly have their amusing moments, as Rachel Maddow explored last night. Among them, messages about controversial religious figures, some notes about rumors surrounding her family, and invitations to concerts that suggesting bringing “beef, tequila, and condoms.”

Maddow noted that her favorite statement in all the emails was the latter, and she couldn’t imagine she had missed anything more amusing despite not reading the entirety of the files. That invitation was forwarded but never replied to, “which means absolutely nothing,” Maddow concluded. She did detail the history of why these emails were released this week. Mother Jones’ David Corn requested the files in 2008, when no one quite knew who Palin was. It took more time for the files to be released– in print– than the entirety of Palin’s tenure as governor. The records are so extensive, however, that the organizations that now have copies are “crowdsourcing” the work of reading them: “everybody read, and everybody share what you find,” Maddow explained. The files can be found here.

Maddow had Corn on the program last night to explain the process and thinking behind requesting the files. Corn explained that “she was such an unknown” that it seemed like a good idea to find out more, and that “one of the first stories I came across [about Palin] was an email request for emails of her aides.” The biggest problem seemed to be that Palin had three accounts, only one of which was public.

Corn also noted that many of the emails were redacted, including one whose subject was “same sex,” and that Palin had expressed in several emails admiration for John Hagee, the other controversial pastor from 2008 who endorsed Sen. John McCain