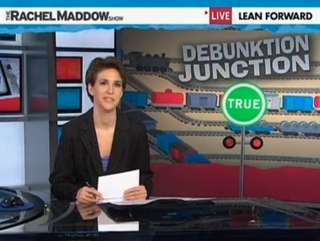 A few nights ago, Bill O’Reilly surprised some viewers by noting that he didn’t see the transgressions of Anthony Weiner as any worse than that of incumbent Senator David Vitter, and that the latter should resign. While the comment seemed consistent with his views on Weiner, Rachel Maddow last night took exception to his sudden calls for Sen. Vitter to vacate Congress, as he argued the exact opposite of that during the fall of Eliot Spitzer.

During Maddow’s semi-regular Debunktion Junction segment, Maddow reported that, in fact, “self-proclaimed ‘fair person'” Bill O’Reilly had finally come around to her longtime perspective and called for Sen. Vitter to resign. Maddow then played this week’s clip of O’Reilly arguing that Sen. Vitter should “absolutely not” be allowed to remain in Congress. That, however, was “very clearly not what Mr. O’Reilly has been saying since Vitter showed up on the D.C. Madam’s list,” Maddow explained, noting that O’Reilly had “never before last night called for David Vitter to resign.”

Maddow noted that O’Reilly had not in 2007 called for Vitter to leave and, in fact, in the subsequent Spitzer scandal, argued that Vitter should stay in office. “When you’re the chief law enforcement officer, and you violate the law,” past O’Reilly explained, “it’s not like being a senator of Congressman or anything else.” Maddow couldn’t help scoffing at what she considered an arbitrary distinction between legislators (“who cares?” she noted) and executives, concluding that it was an “attempt to retroactively look even-handed.”