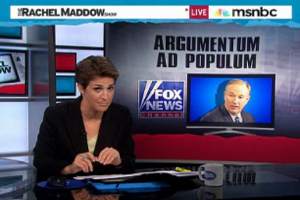 Remember when the cable news cycle was dominated by the ongoing early-aughts feud between Bill O’Reilly and Keith Olbermann? Well, with Olbermann working on a host of other targets, Rachel Maddow is stepping up to the plate and creating a history of her own with the longtime Factor host since he attacked her for her criticism of Fox News– and this time, the feud includes all sorts of formal logic terms in Latin! No, “bullpucky” isn’t one of them.

Maddow began her segment on the Fox News anchor last night by pointing out one of her own errors– his attacks on her based on his enormous ratings aren’t ad hominem, they’re argumentum ad populum— the fancy name for the “bandwagon technique.” Thanks, viewer with a Ph.D. in classical logic!

Then she went on to explain why both his ad populum attacks regarding ratings and his ad hominem attacks calling her a loon were wrong, but highlighted specifically his point that there was “no evidence” that Fox News ran stories designed to “scare white people,” as she put it. That point she classified as “so stupid” it didn’t even have a Latin name:

“It’s him saying that there’s no evidence to back up my claim that Fox News consistently runs stories it says are news, but that nobody else really covers– stories that are ginned up, exaggerated, charicatured, in some cases just flat-out made up scare stories designed to make white people afraid of black people. Designed to make it seem that black people– or in some cases, immigrants– are threatening white people and taking what is rightfully theirs.”

She gave that claim a name of it’s own: bullpucky.

Watch the segment via MSNBC below: