Maddow: ‘Even Romney Agrees That Obama Is Turning The Economy Around’
video

Maddow: ‘Even Romney Agrees That Obama Is Turning The Economy Around’ 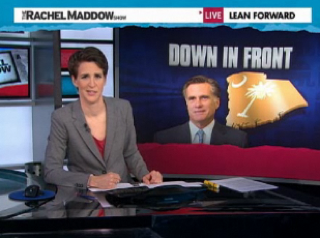 Mitt Romney, for many months, has been considered the inevitable nominee for the Republican Party. That is, until competitors started yo-yoing up and down the polls, and Romney only managed to win New Hampshire and appears poised to lose South Carolina tonight. On her program last night, Rachel Maddow made the point that his New Hampshire win was inevitable, and that he was in more trouble than ever with his economic resume under fire for his time at Bain.

RELATED: Caption Contest: Mitt Romney Does His Own Laundry Edition

“Mitt Romney winning in New Hampshire was a foregone conclusion,” Maddow explained, because “the guy from Massachusetts always wins New Hampshire.” The more damning evidence against Romney was not that he one, but the only two exceptions to the “guy from Massachusetts always wins” rule: Ted Kennedy losing to President Carter in 1980, and… Mitt Romney losing to Sen. John McCain in 2008. Kennedy had the incumbency excuse. What was Romney’s?

“It is true that Mitt Romney is the default nominee,” Maddow admitted, but noted that, while “yesterday [Thursday] was a disastrous day for Mitt Romney, today was worse,” because he actually admitted, in an interview with Laura Ingraham, that President Obama had improved the economy. His entire claim to being worthy of the nomination in stump speeches, Maddow noted, was that President Obama didn’t start the problem, but he made it worse. “The economy had essentially been thrown out a 30-story building and was lying dead on the ground when Obama assumed the presidency,” Maddow argued, and the “state of Mitt Romney’s core argument” was him admitting that things are somewhat better, while questions circulate about his time at Bain Capital. To chime in the disastrous admission, Maddow simply played the clip over photos of Romney: “Even Mitt Romney agrees that President Obama is turning the economy and things are getting better… so vote for Mitt Romney despite that?” Maddow noted. The campaign ad writes itself.