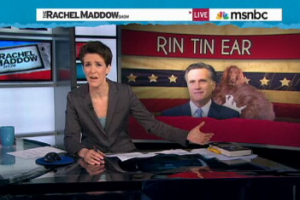 MSNBC’s Rachel Maddow rehashed the Boston Globe‘s highly-disgusting, animal-cruelty-alleged anecdote of the time Mitt Romney strapped his Irish setter, Seamus, to the roof of his car during a family road trip. “Even if you’re okay with the dog being strapped to the roof of the car, once the dog has been up there for hours and is sick, once he is ailing, you take a hose to him and put him back up there and keep driving with him still strapped to the roof of the car for more hours?!” Maddow exclaimed incredulously. Newt Gingrich‘s new attack ad featuring the anecdote put the story back in the news.

The white Chevy station wagon with the wood paneling was overstuffed with suitcases, supplies, and sons when Mitt Romney climbed behind the wheel to begin the annual 12-hour family trek from Boston to Ontario … Before beginning the drive, Mitt Romney put Seamus, the family’s hulking Irish setter, in a dog carrier and attached it to the station wagon’s roof rack. He’d built a windshield for the carrier, to make the ride more comfortable for the dog.

As the oldest son, Tagg Romney commandeered the way-back of the wagon, keeping his eyes fixed out the rear window, where he glimpsed the first sign of trouble. ”Dad!” he yelled. ”Gross!” A brown liquid was dripping down the back window, payback from an Irish setter who’d been riding on the roof in the wind for hours. As the rest of the boys joined in the howls of disgust, Romney coolly pulled off the highway and into a service station. There, he borrowed a hose, washed down Seamus and the car, then hopped back onto the highway. It was a tiny preview of a trait he would grow famous for in business: emotion-free crisis management.

Maddow notes that the original writer recently wrote a followup on the incident:

To me, Romney’s critics have focused on the wrong part of the anecdote. It’s not that Romney put his dog on the roof. Remember how different standards were in 1983. Back then, I was a kid sloshing around in the cargo section of my family’s station wagon, competing with my equally unbuckled younger sister to see how many passing truck drivers we could get to pull their horns. I’ll take the Romneys at their word that Seamus loved his alfresco rides. Hell, my dog loves doing all kinds of things I don’t, chief among them luxuriating in the stink of other dogs’ duffs. What is beyond debate, though, is that this far into this particular trip, Seamus had ceased enjoying his ride. Faced with such irrefutable evidence, most people, I suspect, would have relented and let the ailing dog cram into the back of the wagon, even if logic dictated that cleaning up a repeat episode of his gastric distress would be a whole lot messier than if he were returned to the roof.

Maddow alerted viewers to the website, SpeadingRomney.com, which — in the spirit of the anti-Rick Santorum Googlebomb site, SpeadingSantorum.com — Romney opponents are using to redefine Romney to mean, “to defecate in terror.” 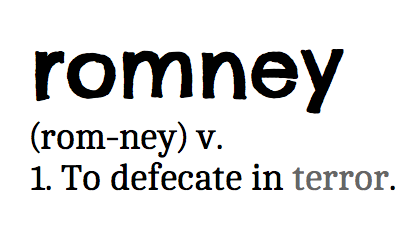 Watch Maddow’s coverage of Romney’s dog incident below via MSNBC: