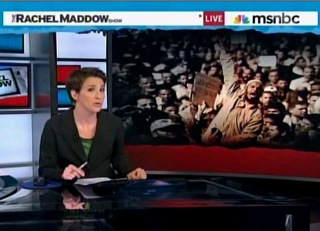 The Egyptian revolts are, for many who haven’t been following Egyptian politics closely, a bit messy to follow. The media have done well in following the government’s internet shutdown and subsequent rearranging, but the root of the problem is far more elusive. Tonight, Rachel Maddow took a step back to figure out whether Hosni Mubarak‘s regime really is a democracy, finding that, if it is, the Egyptian people seem to overwhelmingly favor one party.

“We are way more up in Egypt’s business than most of us think we are,” Maddow declared during her opening segment tonight, noting that, when the revolts began, many of the nation’s higher ranking military officials were in the Pentagon. This, she explained, was not uncommon, since Egypt’s relationship with the United States was close– so close that the only country that received more aid from America worldwide was Israel. What does America get in return? VIP treatment at the Suez Canal (which, Maddow explained, cuts 14 hours of travel off of transporting crude oil from the Middle East to America), relative stability in the region, and Mubarak as a stable president, “as if we really think the way he stays in office is by elections,” Maddow quipped.

She then narrowed down the question she perceived to be pivotal to America’s reaction to this revolt: “As America watches unfold what looks like a revolution in Egypt, the question of Mr. Mubarak’s legitimacy as a leader is the fulcrum on which the drama and the politics and, frankly, the ethics of all this tilt… Does the U.S. believe that Hosni Mubarak holds power legitimately?”

That debate, of course, has been making the rounds on most cable news networks and all over the blogs, but Maddow took her questioning a step further and actually evaluated the elections. Looking at election statistics from both this latest parliamentary election and the one in 2007, Maddow found that Mubarak’s party won an overwhelming, unbelievable number of seats every year. In 2007, for example, his party won a grand total of 87 of the 88 seats up for grabs. The recent numbers looked the same.

Maddow didn’t address the possible alternatives to Mubarak, only that her instincts told her this “democracy” was a bit fishy. Seeing the actual statistics from Egyptian elections, however, shines a different light on the large number of Mubarak protesters now flooding the streets– where were their votes in 2007?

Maddow’s segment via MSNBC below: