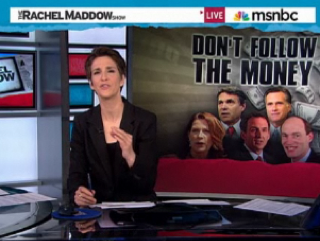 The 2012 election cycle is proving to be a bit of a dry spell for fundraising for many Republican contenders, as even the most powerful fundraisers are appearing to underperform. Last night Rachel Maddow took a look at the finances of several candidates– from the formidable fundraiser Mitt Romney to folksy upstart Rep. Thaddeus McCotter— and found they made significantly less money than one would assume. This led Maddow to conclude the money was being channeled elsewhere, to third party PACs, which could potentially decide the 2012 election.

Maddow did not deny that “Mitt Romney is the prohibitive favorite,” but noticed that the total funds he had put together so far were not exactly meeting expectations. That’s not to say other candidates were doing better: Jon Huntsman dove into his private money to fund himself, while other candidates with less private largess were simply making do. But for Romney this appeared most damaging to Maddow, as he was largely considered the frontrunner because of his money-making ability. “If you don’t actually attract the amount of money you said you were going to, what happens then?”

The culprit, to Maddow, was this year’s landmark Citizens United case, which dismantled much of the Bipartisan Campaign Reform Act (aka McCain-Feingold) and allowed corporations to donate to candidates as persons. “Money is just carving a new path down the mountain this year,” she suggested, noting that, if given the choice, donating anonymously via corporations to private groups instead of candidates is the more appealing way to invest in politics. “Why not instead give unlimited money that you don’t need to put your name on– why not starve the candidates and instead spend on outside groups?”

The night’s guest, E.J. Dionne, agreed, abstaining from calling Citizens United the worst Supreme Court decision ever (Dred Scott came to mind) but calling it “very, very alarming” and “a terrible decision.” He did not give the new fundraising all the credit, however, suggesting that “let’s beat Barack Obama” is a far more popular conservative argument than “let’s elect one of these people.”

Citizens United has done very much to change the landscape of campaign finance, but in arguing that the 2012 election will be more muddled with anonymous money and, particularly, decided by outside groups than any other election is to ignore much of what has happened in the past decade. If anything, the internet’s democratization of campaign donations has done more to involve the public in politics than any decision, as has the establishment of 527 groups that can pay for mass political statements unaffiliated from either campaign.

It is impossible for the 2012 election to be the first decided by a third party group– that title belongs to the 2004 election. Yes, Sen. John Kerry‘s loss can be attributed to the fact that he was uninspiring, long-winded, and offered little new or different to the country. But the final nail in the coffin for that campaign was indisputably the campaign by third party group Swift Boat Veterans for Truth, whose members came out of nowhere to strip Sen. Kerry of what was perhaps his greatest advantage in the 2004 campaign– unlike George W. Bush, he was a war veteran. The Swift Boat Vets turned Sen. Kerry into nothing less than a despicable traitor and national embarrassment. There’s a reason the verb “to swiftboat” is still a common member of our political lexicon: the Swift Boat ads were the first time an unaffiliated third party group used outside funds to sink a presidential candidate with masterful efficiency. For Maddow to present this phenomenon as new is near-sighted, though she is absolutely right in suggesting that the ease with which Citizens United and several similar Supreme Court cases allow for campaign donations will only exacerbate the possibility of such swiftboating.