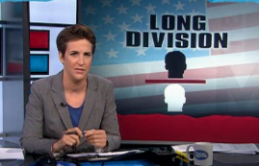 While President Obama may be trying to avoid diving into the racial fray Rachel Maddow jumped right in last night.

In a fairly devastating segment Maddow tied this week’s Shirley Sherrod debacle to previous cases, dating back to the Sixties, of politicians and the media using “scare white people” tactics to generate support.

At and after the Civil Rights era the political strategy of terrifying white people by the threat posed by black people, black people coming to get them, coming to take what’s rightfully theirs, that strategy got a new name, the Southern Strategy…it about making white people feel like they are the victims of black people. Black people are the racists…it’s good politics, it always has been in this country. It still is.

Maddow then aired a series of, it should be noted, rather selective soundbites of conservative personalities including Rush Limbaugh, Glenn Beck, and a variety of Fox News clips — “crusades” including Van Jones, ACORN, and the new Black Panthers — all of which touched on the same theme: white people are the victims.

Maddow is certainly not the first to draw this conclusion, though there are signs that, justified or not — you’d be hard-pressed to paint the entire network in this light — this is going to be a new theme for critics of Fox. Dave Weigel also briefly touched on a similar point in his excoriation of Megyn Kelly the other day, pointing our her fear mongering of the DOJ with the Black Panthers story was reminiscent of the 1966 rumor that flew around “that black gang members on motorcycles were going to head from Chicago to ransack Des Moines.”

However, Maddow sees the trend as being network-wide.

What do the four major Fox News only stories of the Obama era have in common? The four major stories, pressed and pushed relentlessly on Fox, over and above the facts, as their own make up the news cycle you wish you had narrative that they want to pin on the Obama administration?…Van Jones, ACORN, the New Black Panthers, and Shirley Sherrod….This isn’t about racism, this isn’t a story about picking on black people. This is a story about political outcomes…a strategy to feel afraid of black people. To feel afraid of African American people as if they are not fellow Americans, rather a threat to what white people have…This is a political strategy, advanced not by a news organization, but by political activists who use a cable channel as a political outlet and they are pros at this, there is no reason to expect them to stop doing stuff like this. Unless it stops working some day.