Rachel Maddow: Harry Reid ‘Has Been Transformed Into A One-Man Rage Bot’
video

Rachel Maddow: Harry Reid ‘Has Been Transformed Into A One-Man Rage Bot’ 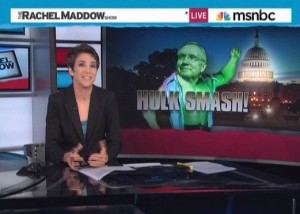 On her show tonight, Rachel Maddow observed that in Harry Reid‘s accusation that Mitt Romney has not paid taxes in ten years exists a kind of anger that believes has been bubbling to the surface in the past few months. She noticed how the normally mild-mannered Reid has not backed down in the slightest after almost a week of making his initial claim, dubbing the senator’s fiery style “Reid Rage.”

RELATED: Harry Reid Spokesman: Republicans Are Being ‘Cowards,’ ‘A Bunch Of Henchmen For Romney’

Maddow recalled when Reid got particularly angry at Republicans for trying to attach an abortion amendment to a flood insurance bill and how she funneled Reid’s words through writer Kent Jones to convey the anger he expressed in his Senate floor speech. However, Maddow observed that since the show made fun of Reid for not being angry enough, Reid “has been transformed into a one-man rage bot.”

She pointed to Reid’s angry response to the Olympic uniform controversy and an interview in which he referred to another individual as a “first class-rat” and a “shit-stirrer.” Maddow dubbed this “Reid rage,” then brought up Romney’s tax returns and Reid’s unverified claim that Romney has not paid taxes in ten years. Maddow noticed that Reid did not back down after being repeatedly slammed and questioned on the issue, and even said that the burden was on Romney because “he’s the one I’ve alleged has not paid any taxes.”

While Maddow found it odd that Reid was taking a “guilty until proven innocent” mentality and said he was being irresponsible, she acknowledged that no one has been able to say if his claim is true or not. She went after Politifact for calling Reid’s claim “Pants on Fire” despite having “zero evidence” to support their claim.