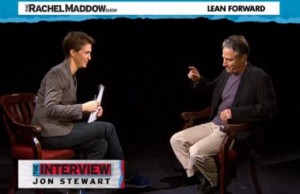 Last night, MSNBC’s Rachel Maddow interviewed Jon Stewart, and spoke at great length about the current state of journalism, particularly in the context of cable news’ ability (or lack thereof) to distinguish news from opinion. The conversation was at times confrontational, but always respectful; well-reasoned and yet still confusing; an intellectually challenging, if not academic, discourse about media that certainly deserves further parsing and analysis in the coming days.

What does it say about the current state of media that two of its most currently respected personalities can sit down for about an hour to discuss the state of Journalism and opinion media (vis-à-vis cable news), and somehow not come away with any clear conclusions? One gets the sense future Journalism professors (or whatever they’ll then be called) will point to this interview as a seminal moment in the definition of news coverage and opinion media, or perhaps real news vs. meta-news. Maddow and Stewart each seemed to see themselves in different roles than they considered one another, but not for the same reasons. But we’ll get to that in a bit.

First of all, both Maddow and Stewart deserve the highest praise for digging really deep on a difficult subject, and never once erring on the side of simplifying their cases for the audience. Any expectation that this conversation would be a mutual love-fest was quickly deflated. In her own inimitable style, Maddow took very seriously Stewart’s recent critique of MSNBC’s part in the cable news “conflictinator,” and did not shy from challenging The Daily Show host on his rhetoric. For his part, Mr. Stewart reminded us all, again, that he really is the smartest guy in the room, even if, at times, his non-comedic persona brings with it the knowledge that he is..the smartest guy in the room.

As for the actual discussion points, there is a lot to get through. But Ms. Maddow’s claim that Mr. Stewart put up a “defense of George W. Bush and the Iraq War and water-boarding” is a post for another time. This piece is an effort to reexamine some of the media analysis highlights from last night’s interview. Things got very interesting when the two explained the Fox News phenomenon, particularly Stewart’s summation:

>>I think the brilliance of Fox News, they delegitimized the idea of editorial authority, while exercising incredible editorial authority. It’s amazing. And they also have the game that they’re all out to get us. Any criticism of them can be filtered through the idea that it’s persecution. This isn’t criticism, it’s persecution. That’s a tough distinction to make. Nobody likes to be criticized. I don’t like to see people I like and respect go, “That rally was useless. It did nothing and, in fact, you’re crazy and wrong.”

Most interesting in the back and forth that followed on how Fox News works its so-called “magic” was the starkly different tone the two took: Maddow clearly views it as “black magic,” or an occult and evil enterprise, whereas Stewart seems to see it with the wonder of a “magic show.” Either way, it led to a discussion on the evolution of programming at MSNBC:

>>(Stewart): Do you think MSNBC changed over the last five years? There is a genetic linkage between Keith– Keith was the first. It was a voice in the wilderness. People were like, what? You can say that? You came on. Now, I’m talking about climate as opposed to weather. But it does create a linkage that I think it would be hard for you to say, “Geez, I don’t know if we’re really doing that.” Then what are you doing?

>>(Maddow): I think the media, having been derided for so long as being liberal and biased and very afraid of that charge, when Keith spoke out the way he did, he essentially came out of the closet as a liberal. And nothing bad happened. It was still okay. He grew his audience, if anything. I think it gave network executives some courage to say, “Okay. people are liberals can be on tv as long as they call themselves liberals.”

>> (Stewart): The idea that executives work on courage — I think what they did is said, “Why is fox news kicking our asses? We need to fight this with a similar — this is an arms race.”

>> (Maddow): Being here and having those conversations, that never happens. What happens is, look, Keith’s making money. How can we do more of that? That’s more the conversation.

So while there was slight disagreement as to the symptoms of the issue, they appeared to agree that MSNBC evolved as a reaction to Fox News, though with significant differences. Stewart echoed a point that he made earlier to Fox News’ Chris Wallace, namely that MSNBC will never “win” as long as it continues to try to play FNC’s game (while also criticizing its methodology.)

One of the more illustrative parts of the interview came after a discussion on the merits of the offensively comedic term “teabaggers,” which highlighted the differing standards between Stewart and Maddow. Here’s the transcript (from Maddow’s blog):

>>(Stewart): I have the leeway. but the one thing i don’t have the ability that you have is the ability to really do something about it. You’re in the game.

>> (Stewart): You’re on the playing field and I’m in the stands yelling things.

Stewart goes on to explain, quite adroitly, his role as satirist relative to that of an opinion media personality, but it’s not exactly correct to claim that he adds his commentary from the sidelines. Mr. Stewart is very much in the game of forming opinions based on the news, though to be fair, his take is significantly different from that of Maddow and others. But 200,000 participants at the Rally to Restore Sanity didn’t “meta-participate” in a support for a reasoned and sane discourse. Stewart is in the game, though he’s clearly much more comfortable (and perhaps even effective) voicing his critique from the sidelines. Whether he asked for it or not, Stewart has been handed the Cronkite “most trusted” mantle. That puts him, not in the game, and not in the stands, but in the zebra shirt, refereeing the whole affair.

And while the lengthy discussion on the state of journalism seemed to raise as many questions as it answered, one can actually feel optimistic about the future of news and opinion after watch two super smart personalities talk in a respectful and enthusiastic manner. Watch the entire, uncut video from MSNBC below: