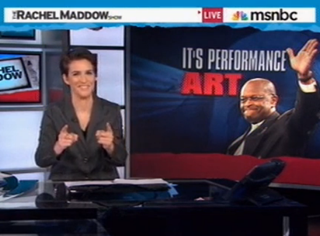 Rachel Maddow was very disappointed in herself last night. It finally dawned on her, she explained, that she had been had. “I should have known at Pokémon– we all should have known at Pokémon.” Maddow was talking about the Herman Cain candidacy, which she had concluded was not a real campaign. “The gaffes are too perfect,” she told her audience, concluding that the campaign was “not about politics– this is art about politics.”

“I feel like an idiot about this,” Maddow confessed, beginning with the Pokémon reference that raised more than one eyebrow, as it appeared in a presidential debate, and Cain prefaced the Pokémon theme song quote with, “a great poet once said.” “I believe that the Artist Formerly Known as Herman Cain was trying to end it right there,” Maddow argued, “[but] we weren’t willing to see the whole thing at that point.”

So then Herman Cain released 999, which ended up being, as Maddow explains, “the operating tax structure in Sim City,” a video game where you get to play the mayor of a town and try to not bankrupt your own government. Granted, “Herman Cain angrily denied this,” but Maddow contends “we were supposed to get the joke at this point.” Instead, he’s at the top of the polls. While Maddow understood that unpolished politicians made gaffes, for her, “the gaffes are too perfect… this guy is pulling our leg.”

At that point she turned to a serious Cain appearance– his abortion comments on Stossel, where he intermittently went from saying he was “pro-life,” but that it “wasn’t the government’s choice.” As he said this, fellow guest Ellis Henican‘s jaw can be seen literally dropping. “Ellis Henican, at that moment, on Fox News, knew we were being punked,” Maddow noted, showing the screen capture.

The problem with the “art project,” Maddow concluded, is that there was nothing the Cain campaign could do to stop it or make people get the joke. “There’s nothing this art project can do to get Herman Cain out of the polls,” she notes, “America is by and large not getting the joke.” The reason? “I blame myself… when he quoted the Pokémon movie song,” Maddow concludes, “that, I think, was a challenge to people who have jobs like mine to recognize that this has been an art project. This has been satire.”