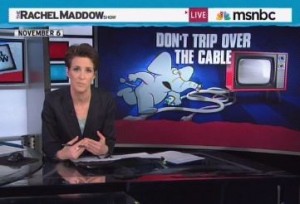 Rachel Maddow tonight opened her show looking at the state of Democratic and Republican leadership in the Senate. Both have their share of problems, as Maddow pointed out, but the more amazing news came as Maddow played audio of RNC Chairman Reince Priebus attributing the GOP’s problems in the 2012 election to MSNBC hosting debates. Maddow reacted to Preibus with as much derision as she could possibly muster.

Maddow pointed out how Republican leadership has been thrown for a loop in the past few days, with President Obama going around them to have direct meetings with Republican senators and congressmen, and Rand Paul basically going rogue and filibustering for 13 hours “without telling anyone who was in charge.” However, Maddow briefly acknowledged that Democratic leadership is having its share of problems, as one of their biggest post-2012 priorities was to hold on to veterans incumbents up for re-election in 2014, only to see four out of the five big names on their list retiring.

Maddow found it interesting that keeping those senators was a top priority for Democratic leadership, though at least they did well in the last election, and on that front Maddow highlighted the news that the official “autopsy” into how the Republican party lost so badly in 2012 has completed its work and the report is ready to go public. Maddow highlighted this statement made by RNC Chairman Priebus giving some insight into what the party’s problems were in 2012.

“Controlling the debate process, getting involved in moderators and networks and all of these other issues, so that we don’t have chaos. I mean, we just can’t have MSNBC hosting a debate at the Reagan library only to have their network… make the commentary afterwards for three hours about the debate of the Republican party. I mean, it’s ridiculous.”

But what Maddow found ridiculous was that the Republican National Committee chairman would suggest that MSNBC had anything to do with why the party lost. Maddow asked “We’re what needs to be fixed in the Republican party? Seriously?”

Watch the video below, courtes