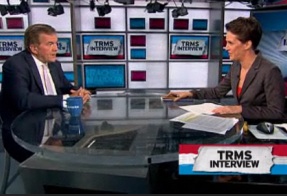 When a high-ranking government official meets an establishment journalist, the ensuing fawning at the feet of power can sometimes be too much to bear. Just last weekend, blogger Andrew Sullivan compared Fox New Sunday’s Chris Wallace to a “teenage girl interviewing the Jonas Brothers” for his lack of incision in a televised segment with former Vice President Dick Cheney. And then there’s Rachel Maddow, who on last night’s episode of her MSNBC show was the most well-prepared “teenage girl” on TV, calmly dismantling every argument put forth by former U.S. Secretary of Homeland Security Tom Ridge.

In what essentially amounted to a seminar on left-leaning critiques of the Bush administration, Maddow asked pointed questions on the gamut of security issues, but landed the most blows when she zeroed in on U.S. intelligence in the lead-up to war. Under President George W. Bush, Ridge helped build the case for the war in Iraq by corroborating reports that America’s domestic security was at risk from chemical and biological weapons. On the program to promote his new book The Test of Our Time, the former Pennsylvania governor was reduced to a rambling, stammering mess as Maddow took him to task as a “crucial” part of a “false case to the American people.”

Maddow remained smooth and assertive throughout the interview, keeping Ridge on the hot seat with questions about his level of responsibility for “Homeland Security failing so catastrophically” during Hurricane Katrina (only seven months after he left office) and the manipulation of terror alert levels. New York University professor and press critic Jay Rosen went so far as to call Maddow’s measured, piercing performance “one of the most extraordinary things I’ve ever seen on television” and even compared the host to the late Edward R. Murrow. Check out the entire interview, in three parts, embedded below.