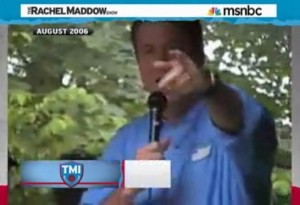 Wait, what? The Republicans are running George Allen, the “Macaca” guy, for Senate in Virginia?

On her Tuesday night show, Rachel Maddow broke down the connection between a new National Republican Senatorial Committee (NRSC) ad depicting DNC chair Tim Kaine as a female cheerleader, and the nascent Senate candidacy of George Allen. The ad is definitely setting the table for a Kaine-Allen matchup, but Maddow’s conclusion that the GOP is “nervous” about Allen’s prospects is belied by the fact that he’s already tied with Kaine. So what’s going on here?

The segment starts by calling out the NRSC’s new homo-baiting anti-Kaine ad, and then, in case you missed the last five or so years in American politics, Maddow and Kent Jones catch you up on Allen’s history:


To her credit, Maddow doesn’t pick the low-hanging fruit that is Republicans mocking someone as a cheerleader, and she soft-pedals the offensive subtext of the anti-Kaine ad.

The connection between the NRSC ad and a possible Kaine-Allen race seems fairly obvious, and to normal Americans, her conclusion that the GOP is “nervous” about the enormous risk of running a candidate like Allen seems reasonable.

But in Virginia, it’s less a risk than a bold strategic move to use cultural dog whistles to turn out the anti-Obama vote. While the use of the cheerleader outfit is the shiny gay-baiting object in the ad, it is the broader subtext of Kaine’s subservience to Barack Obama that really speaks to the “Macaca” voter. In a state like Virginia, already used as a cultural battleground in the 2008 election by then-candidate Sen. John McCain, the combination of soft enthusiasm for Kaine and an Old South candidate like Allen spells “Southern Strategy” in big, bold letters.

Maddow sees desperation in this move because she lives in a world where it is absurd for a candidate like George Allen to exist, but as Allen famously told oppo-videographer S.D. Sidarth, “Welcome to the real world.”