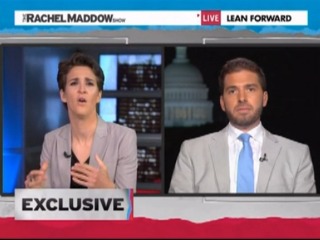 On her show Wednesday evening, Rachel Maddow reported on the small aircraft that flew over Tampa during the city’s recent GOP debate, carrying a sign asking where the President’s “real” birth certificate is. “If you thought the birthers were gone,” said Maddow, “if you thought conservatives were over this thing about President Obama’s birth certificate, they are not.”

(Might I be permitted to become very angry for a hot second? Thanks! No, this little airplane stunt doesn’t indicate that “conservatives” are not “over” this “birth certificate thing. “Conservative” still does not equate to “birther.” Or vice-versa, really. What serious people, conservative and liberal alike, care about right now are jobs and avoiding finding ourselves faced with a series of crumpled IOU notes and tumbleweeds when we reach retirement.)

It turns out that the sign — which also appeared at the recent Iowa debate in the form of a large billboard — comes courtesy of the folks over at WorldNetDaily, who are not quite the greatest fans of Obama. Maddow described their mission as essentially “trying to make a buck off the more gullible elements of the conservative base.”

She pointed to some of the group’s previous projects, such as their reports on the need to wage a war on Islam itself rather than on terrorists acting under their own fundamentalist interpretations. Then, onto the real meat of the report: Maddow brought on Wired‘s Spencer Ackerman, who broke a rather amazing series of stories about how the person behind those WorldNetDaily reports regarding Islam has been instructing FBI counter-terrorism officers. Ackerman explains:

What they [the FBI] did tell me is that this was training that agents who had two to three years of experience in counter-terrorism have gone through. And they said to me that this is just the opinions of this one particular author, who you intro’d very well. We’re still trying to find out the extent of this training.

When asked why someone within or close to the FBI is now offering him this information, Ackerman explained that the training has been “deeply upsetting” to counter-terrorism experts inside the FBI concerned over civil rights of Muslim Americans and the impression this sort of attitude might have on their impression of those meant to protect them and all law-abiding Americans.