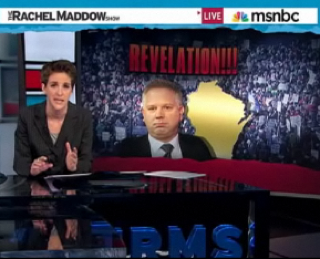 Credit where credit is due– Rachel Maddow may constantly be picking her jaw up off the floor whenever her job requires her to watch Fox News, but last night, she almost praised Glenn Beck‘s “showmanship.” The subject? The impending arrival of the Antichrist, and its relation to both the protests in Egypt and Wisconsin, had Maddow’s head spinning, but once again she attempted to get the story straight.

Maddow may appear unable to stomach Beck’s program alone– she seems to only watch it on the air, with an audience to support her while she scrambles to find logic– but she gets an A for effort compared to many on the left. Finding an author named Joel Richardson on the program (and Beck rarely has guests), Maddow did a bit of investigation and found that Richardson’s magnum opus is an article from far-right site World Net Daily suggesting the possibility that President Barack Obama may be the Antichrist. Not  surprisingly, Richardson was booked on the program to talk about precisely that– not the President per se, but certainly the inevitable surfacing of the Antichrist. But before getting to the specifics on him, Maddow tried to explain to her audience the connections Beck has been making between “what is happening in Wisconsin and how it connects to Egypt, because the Muslim Brotherhood is organizing the Madison protest in order to turn Wisconsin into part of the caliphate so labor unions will destroy Israel so you should store food and… buy gold? Or Something?”

She then showed a series of clips that seemed to follow that logic– well, the food storage point appears to have been lost somewhere along the way– though she stopped to give Beck “showmanship” points on his Antichrist talk. So why is Maddow quite obviously torturing herself watching what she calls “Republican State Television,” even if doing so on a national stage to an audience that does not watch it? To help families and friends get along: “one of your more gullible conservative friends or relations sometime soon is going to come to you and tell you that the Antichrist is why Hosni Mubarak was a good guy and the Antichrist is the reason firefighters in your town shouldn’t have Blue Cross Blue Shield.”